Priced out of Dublin? Consider Naas 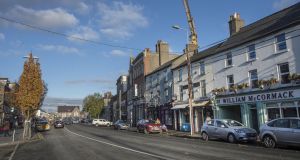 Naas’s Main Street. The town, which has a population of 20,000-plus, retains a village vibe despite its size and range of facilities. Photograph: Brenda Fitzsimons

Of all Dublin’s commuter towns, Naas is one of the best thanks to its location and services. And with both of those qualities, it’s no surprise the town is on the verge of a construction boom.

The town is an ancient one that was the seat of the King of Leinster, until the death of Cearbhall in 904. The Normans took the town in the 12th century and King Henry IV signed a charter declaring Naas a corporation town in 1409, one of the key steps to making it the county town. As the town grew it was given several further charters until it came under the administration of the Urban District Council in 1900.

In the present day, Naas is a 20,000-plus strong town and one that, despite its size and range in facilities, retains a village vibe. This writer bumped into former Ireland soccer international Niall Quinn, who’s living in Straffan, while walking down the Main Street – and that’s the way the town is: notable but accessible.

Over the coming years, Naas will see a large number of new homes come to the market, making it one of the fastest expanding towns on the commuter belt, and offering families a chance to buy new three- and four-bed homes at prices that are scarcely available anywhere in Dublin.

“Landen Park is on the Sallins Road; we’ve sold all of them bar the showhouses, which is three units of 111,” says Will Coonan, of REA Coonan. “Oldtown Walk is on the same road, it comprises 50 units. That commenced January 2017; we’ve about 35 of those sold and 15 families already moved in. That’s a mix of three- and four-bed semis and four- and five-bed detached.

“Another scheme that we’re involved with is in Gigginstown, which is out at Elsmore at the back of the Kildare County Council offices. The first phase there is about 80 units, but the scheme will go to about 300. The showhouses will be ready in May of 2018.

“There are two schemes being developed by Ballymore Homes, one is called Stoneleigh where up to 200 homes will be built and which was launched at the end of 2017. The other is at Piper’s Hill called Bellingsfield, where 200 new homes will also be built.

“There is a further scheme in the town called Finlay Park, which is along the canal, a mixture of three- and four-bed semi-detached. There’s a new scheme under way called Castle Farm, and that’s up at Gigginstown, near the Elsmore development.”

A 40-minute to one-hour drive from Naas brings one to the centre of Dublin, making it very feasible for a daily commute, however, the motorway can get jammed at peak hours, hence some critical infrastructural changes coming into place.

“The M7 is being upgraded from two lanes to three lanes from junction 9 at the Naas north exit to the point where the M7 and M9 join [before Athgarvan]. A new interchange is also going on that stretch of road as well at the Millennium Park, which will give a third access point to the town from the M7,” says John O’Reilly of Sherry FitzGerald.

The train is another commute option with the Sallins and Naas Rail Station connecting to both Dublin Connolly and Heuston; a typical commute from Naas to the IFSC each morning “can be done in circa one hour”, adds O’Reilly.

The population divide consists of those working locally and those who are making the commute to Dublin offices, with new buyers predominantly young families who are keen to get a new home rather than invest in the second-hand market.

“Locals are buying, and Dubliners. You do also get buyers with a connection to the south of Ireland,” says Coonan. “They work in Dublin, live in Naas, but are from Limerick or Kerry, say, and they can jump on the M7 on a Friday evening and come back up on a Sunday and avoid Dublin traffic.”

What about local employment?

Kerry Group have a large presence in the town with a global centre in the Millennium Park, a business park encompassing 200 acres which has several units currently on the market and under negotiation, while a tract of that land will also be used for residential with “a transaction taking place there recently and Glenveagh acquiring land in Naas at the end of December”, according to Coonan.

The town centre is built in the traditional Irish village-style, linear settlement, with the Main Street snaking its way through the heart of the town and offering up a wide array of service-industry outlets.

Clothing is catered for by several outlets including Benetton, Richie Whelan’s Menswear and Elverys. There are a number of very well-known pubs in the town including Grace’s, Hayden’s and newer offerings such as 33 South Main, while Lawlors Hotel is also adding an extension as they expand towards the rear of the premises; a niche grocer, Swans on the Green, is located at the southern end of the town; Lidl and Aldi have presences close to the town; and a plot of land on Main Street is up for redevelopment with “Dunnes Stores rumoured to be the moving into the premises”, according to O’Reilly, with SuperValu already having a presence towards the southern end of Main Street, and Tesco Extra located at the northern end.

The town has a very steady base to serve the current population, however, given the large-scale housing development planned, and currently under construction, Naas town as a service centre is going to continue to grow. Land for a new public secondary school has already been allocated in the Millennium Park to cater for the growing teenage population and plans for a Naas Shopping Centre – not to be confused with the already existing Naas Town Centre – are being discussed as movement continues across all sectors of construction.

And the property prices?

The market in Naas caters for all comers. At the entry point to the market one can buy a two-bed apartment for €119,000 at Gregg Court, Kilmeague, outside Naas town itself, while €170,000 will get you a two-bed new-build apartment at Craddockstown.

Moving into the middle of the market, a three-bed semi-detached at Craddockstown goes for €265,000. A jump again to €340,000 will get a four-bed, end-of-terrace home at Elsmore. Up closer to the top of the market, one can buy a detached four-bed home at Caragh Heights for €450,000. At the peak of the market there are period homes available with a starting price of €1 million and ranging up to €2.4 million at present.