Priced out of Dublin? Consider Dunboyne

Just inside the Meath border, the town is home to many who commute to Dublin 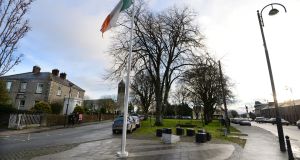 Dunboyne’s Main Street. The largest development in the area is Dunboyne Castle, located along the Maynooth Road, with a total of 552 homes. Photograph: Alan Betson

Just inside the Meath border, Dunboyne is a popular village that has grown consistently over the last 15 years. It is right on the fringes of Dublin, with Clonee the only other Meath town along the M3 before one enters the capital’s county borders and towns such as Damastown, Blanchardstown and Castleknock. In fact, from Dunboyne, Dublin city can be reached in under half an hour in off-peak times.

In present day, Dunboyne has managed to keep its village very much intact, despite having a total population of nearly 10,000. This is largely due to an excellent preservation of the centre, focused around a village green, and a crossroads just past it. Around those two locations, the town spreads out but, crucially, has not been overdeveloped, which has maintained the feel that one is in rural Ireland, not just a stone’s throw from Dublin city.

The largest development in the area is Dunboyne Castle, located along the Maynooth Road, which was begun in 2004 and completed 10 years later. The mixture of 552 homes includes townhouses, detached and semi-detached homes and the scheme forms its own village of sorts, with the hotel at the centre providing leisure facilities as well as being a busy venue for weddings and conferences.

The addition of an Avoca store last year has drawn lots of traffic and interest to the village. Its location outside the centre, to the north of the M3, draws locals and visitors away from the main thoroughfare, helping to preserve its unique appeal.

The Dunboyne Castle scheme provides a steady supply of second-hand homes as owners trade down or up. The entry level to the market is a one-bed apartment at The Court, Dunboyne Castle, starting at €175,000. The centre of the village offers period terraced homes from €225,000; larger three-bed apartments in The Court cost €240,000.

Are there any new developments coming to the market?

Developing Dunboyne into a town with three times the population of what it has today was proposed by Meath County Council in the Celtic Tiger days, but it ran aground along with the economy.

The original plan was to build a ring road around it, thereby making the newly built neighbourhoods accessible to the centre. At present, development plans are minimal but this is expected to change in the coming years.

The land surrounding the train station is zoned for development, with an elderly landowner believed to be waiting for the right time and offer to sell the prime piece of real estate, which is adjacent to the junction with the M3 and main artery to the city.

The only nearby development that has broken ground is in the neighbouring village of Clonee, where Glenveagh is building Holsteiner Park – a development of four- and five-bed homes. “Holsteiner Park is a development of 21 homes. “We’ve sold five, seven are coming to the market in the next phase and then the third phase will comprise the final nine builds,” says Will Coonan of REA Coonan, one of the agents handling the sale. “Prices for a four bed start at €795,000.”

A new development plan is expected from the council in 2019, by which time it’s predicted that a number of developers may have already announced plans to push ahead with new projects.

The M3 motorway connects Dunboyne directly to Dublin via the N3, which becomes the Navan Road, and runs past the Phoenix Park, through Cabra, before connecting to Prussia Street in Stoneybatter, and with it opens up access to the Four Courts and the city centre. Dunboyne train station has a service running into the Docklands, making it ideal for workers in the IFSC and across Dublin 1, while Bus Éireann also runs a service from the village green into Dublin 1.

Primary and secondary education are both catered for in the town, as is third level through the Dunboyne College of Further Education, which is located in the Dunboyne Business Park. The college is looking to expand and has been in touch with local agents about securing a larger, permanent home.

A variety of sports are served in the immediate area. GAA is the big one. St Peter’s Dunboyne GAA has senior teams in Gaelic football, hurling, ladies’ football and camogie; St Paul’s GAA are the second team in town. Sean Boylan – who managed Meath to four All-Ireland titles – also lives in the town. Dunboyne AFC was named Soccer Club of the Year by the FAI in 2009. But a range of other sports are also supported in the town, notably through Dunboyne Tennis Club and Dunboyne Athletics Club.

The population largely consists of Meath natives and Dubliners. Current buyers are locals who are starting families, and Dubliners who are finding the prices prohibitive in Castleknock or Blanchardstown, and are looking across the border to Meath. There is also a growing foreign national population of eastern Europeans,and a number of South Asian residents.

It’s a pretty, busy village with traditional pubs such as Brady’s and Slevin’s – the latter famous for its generous carvery lunches.

Local village elements such as a butchers and a fish seller, which visits the village on Wednesdays, are still in place. Larger retailers haven’t yet taken over the village, with a trip to Clonee necessary to access the likes of Lidl and Aldi.

Dunboyne may be ripe for development, but one hopes that when that happens, which seems inevitable, the small-town feel of the village can be maintained to some extent – hard as that may be to do. Even as a bolthole for day- or weekend-trippers, not just property hunters, this little niche of the Royal County has a lot going for it.