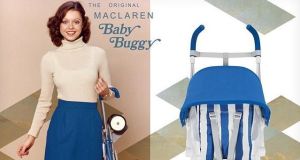 With baby buggies – or heaven help up us “baby transport systems” as they are often billed – now costing as much as a half-decent second-hand car, Owen Finlay Maclaren’s (1907-1978) simple invention is particularly appealing.

In 1965, the British aeronautical engineer – who had been a test pilot and a designer of aircraft parts, most notably the undercarriage of the Spitfire – was taken with how unwieldy his grandchild’s pushchair was and how difficult it was for his daughter to fold it up. Applying his aeronautical design skills – and just as importantly the materials he was familiar with – he took aluminium tubing and designed two X-shaped hinges to create a lightweight collapsible buggy that could be folded into a narrow, flat shape.

The child sat in a light fabric sling that could also be folded in on itself. Crucially for users with a baby under one arm, collapsing the buggy could be done with one hand and one foot. He patented the design in 1965 and his Maclaren buggy – which revolutionised baby buggy design – was a massive commercial success from the moment it went on sale in 1967.

The design was subsequently refined and improved with brakes and swivelling wheels (like the 21st-century version pictured here) but the basic shape and mechanism remain the same. His buggy is an example of how good design can have a massive impact on lifestyle and behaviour, for example by making public transport more accessible for toddler-toting parents.

Work from home in a picture perfect Wicklow country garden for €1.35m
7