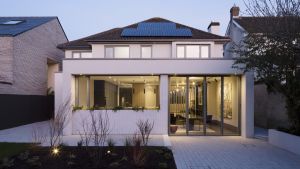 Sometimes adversity can result in bigger and better things. For Mark O’Sullivan losing his job in 2010 drove him to start his own building company Clanforce, a brave move at the height of the recession.

A carpenter by trade, O’Sullivan recalls how he became an overnight victim of the property crash: “I got a call on a Friday afternoon saying there was no more work for me. That was it, overnight. My daughter had been born just two weeks before, and I decided that day – at least if I start working for myself – I’ll know where I stand.”

A decade later he stands outside his latest completion; three fine houses at Grove Avenue in Malahide.

O’Sullivan bought a substantial house on a large corner site, and set about building two new properties – a family home and a large mews – in addition to completely renovating the existing property.

O’Sullivan engaged Ciarán McCoy of ODKM architects who he had worked with on previous jobs to design and oversee the three properties: “It’s not just a design when you are dealing with an architect, it is a three-year process from initial talks, to planning and completion. I really like the ethos of ODKM, and as a builder they challenge you. It is exciting to work with creative architects that push all the boundaries.”

The original house is more or less a new build as everything with the exception of the external walls are brand new. “We have taken it from an E1 BER rating to an A3 – so that gives an indication of the work involved.”

O’Sullivan also engaged other firms he had worked with in the past. “When you get to know the standards of work by different firms, it is an easier job as you know the result before you even start,” says O’Sullivan of the joinery and storage by McNally, kitchens by Dean Cooper and landscaping by Peter Donegan.

The smallest of the three properties – the mews – has sold, and O’Sullivan has placed the other two houses on the market through Sherry FitzGerald seeking €1.65 million apiece.

It is all very high tech in the smart interiors, which have been cleverly designed with an abundance of storage throughout.

The utility rooms located behind secret flush panels – allowing for minimalist streamlined kitchens – are what O’Sullivan terms the “brains of the houses”.

From here, the properties can be controlled through a mobile phone, in terms of heating, lighting, alarms and CCTV. The Mode lighting system is quite complex and allows different mood lighting to be set throughout the house and gardens. Unsurprisingly a property’s sale includes a half-day training with the company on the workings of the system.

The houses are also wired for remote-controlled blinds, which, if new owners decide they want further privacy, will fit flush into the ceilings above the huge concertina doors to the gardens. This will allow owners to open and close blinds when away.

“Really we were trying to future-proof the houses, and cover all the elements that people will need down the road, which is also why they are wired for electric car charging.”

On the design front it’s all about internal light, and much thought has gone into how light flows through each house. In the original property, besides mammoth concertina doors, the internal wall between the livingroom and the main open-plan kitchen/dining/living area is a mixture of glass and wooden slats, giving privacy but allowing lots of light to permeate through.

Next door, Inverin, which has three bedrooms and a more contemporary feel due to its cantilevered upper floors and floor-to-ceiling doors and windows, extends to 215sq m (2,314sq ft). Though from the exterior you would be forgiven for thinking that it is smaller than Drimnamore the secret here is that Inverin has a third floor in what planning regulations allowed as an attic. Accessed by a full staircase, the space is generous and is wired for television, with an office area and full-sized bathroom.

Fittings throughout the houses are all high end, with sanitary ware from Ideal bathrooms, and flooring from Barefoot.

Both houses are detached, and side access will allow children to run amok in the gardens without trailing muddy feet through properties.

The attention to detail is remarkable. Inverin features a small Japanese garden in a tiny courtyard giving a verdant feel to the hallway, and both houses have induction downward extractor fans that won’t detract from the streamlined kitchens.

“It’s funny,” says O’Sullivan, “you are here working on site for years, then suddenly it’s finished and overnight you take pictures and walk away. Then again I enjoy what I do so it was never really a chore in the first place.”

Irishman on life in India: Police beatings, suspicion of foreigners and loudspeaker warnings
6

Let Joe Wicks get your children fit. All you need is a screen and some space
8

From eating healthily to staying warm, how to treat coronavirus in the home
10