“Mind yourself, it’s . . . different over there,” a well-wisher told Ceire Sadlier 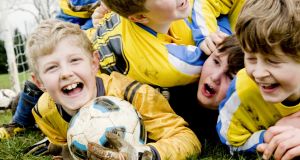 Her son is on his haunches in the wet grass, fist to chest, urging a circle of six-year- olds with untied laces to play football with their hearts.

We got notice on our redbrick rental home of 18 months and the woman next door clutched my wrist like a pulse taker when I told her we had found somewhere in one of the Clans.

We drove the last car load of black plastic bags through the streets that wind and loop, past hundreds of houses stacked like dominos, painted all the colours of Dollymount Strand on a cloudy day. Grey, blue, cream, brown and stone they go, tied together with a white ribbon under the top window.

This was the 15th time I had properly packed up and moved somewhere new. I’d never been part of a place for long and I wasn’t sure, from all the things people said about it, we’d get to be a part of this place either. Used to have a terrible reputation, they said. Loads of heads up there when I was growing up, they said. Might be better these days, they said.

I drove into the tight keyhole with the timidity of a stranger slipping into a country pub in the middle of the day for a wee, trying to negotiate the gap into the narrow driveway without scraping off the neighbour’s car. Small children on the street stood watching, wide-legged and straight-faced.

I wondered what three generations’ worth of neighbours would think of us floating in with our rent money, displacing their children from growing old in the place they grew up, pushing their grandchildren further north or west.

There was a soft, low thump on the door and a three-year-old wearing a T-shirt in March cocked his head to look past my legs.

“They comin’ out?” He pointed at my children, peeking out, unused to being called for.

We quickly found warmth and comfort there, carried along from our small nook in this complex place, like Sophie in the BFG’s ear. The neighbourhood has a physical density and a social vigour that prevents anonymity. If you’re in luck or in trouble there’s not a lot of places to hide.

I had never truly understood what community meant until I lived there, connecting the dots day after day to see how people can be unified and divided by the place they lived in, drawn together or pushed apart by words, actions and circumstances.

The more faces I got to know, the more smiles and scowls I recognised as I walked the many routes to schools, shops and parks, the more contented I’d feel looking out from the top window onto the midnight lit houses – my street, my neighbourhood.

There’s a woman in her 80s who knocks on her living room wall to say hello to her friend before she remembers that her neighbour of decades is gone. Her son is on his haunches in the wet grass, fist to chest, urging a circle of six-year-olds with untied laces to play football with their hearts.

On the sidelines, a man tells a woman who he knows only from this spot behind the goals about a personal trauma from 20 years ago. He lives next to the woman who waves her kitchen knife at people who make suggestions about her front yard.

There’s an ice-cream man leaning out of his van, explaining to a two-year-old holding up 17 snot-covered cents that it’s not enough for a 99. Eventually he hands a thimble of white foam to the confused but satisfied child.

He went to school with the woman talking nervously under a buzzing fluorescent light in community hall.

“Will I be alright getting back to my car carrying this laptop?” a man jokes as he leaves the meeting. “Your car’s already gone, pal!” a voice from the crowd retorts.

A woman he sees every day on the train platform chases a brogue-footed politician down the street, waving her fist, screaming about a country torn asunder. The snow falls silently and when it is deep enough, everyone piles out for a snowball fight in the same spot where a ferocious roaring match a week earlier had brought mothers out to sweep their children in.

But, when an opportunity came up to move somewhere with a functioning heating system and a more stable rental offering, we had to take it. We packed up the car with black plastic bags again. No one gave us any warnings. That’ll be lovely, they said. They’re real proper down there, they said.

There is an immeasurable ease from not having to worry about losing our tenancy. Our new location has wide, tree-lined streets, yellow leaves on the paths and sea salt in the breeze – a lovely place. New neighbours welcomed us with long stemmed flowers that bloomed for weeks. A boy with shiny hair and his hands clasped behind his back asked if my son would like to come out to play – lovely people. And we are grateful.

But I really miss Donnycarney.

Coronavirus: ‘Like my anxiety, my survivalist mentality come and goes’
5

From eating healthily to staying warm, how to treat Covid-19 in the home
7