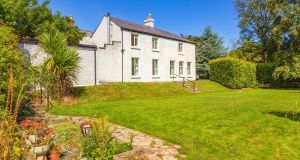 With the market at this time of year usually heading into its seasonal summer lull Lisney must be pleased to have gotten away a substantial south county Dublin house at auction, and for a cool €200,000 over the pre-auction AMV (advised minimum value).

Kilmuire, a sprawling house on .9 acre grounds on Military Road, Killiney was auctioned on July 8th, not in Lisney’s head office as would normally be the case, but in the house itself – something that hasn’t happened for a long time in the Dublin auction scene.

Lisney’s Rory Kirwan, who handled the campaign had been guiding €1 million for the seven-bedroom house, which had been home for many years to the nuns of Holy Child School next door. The number of residents had dwindled in recent years to the point where it was no longer practical to keep up the 310sq m (3,335sq ft) house and so the decision was taken to sell.

The €1 million AMV proved a strong draw even in a pandemic, and no less than 15 conditions of sale were requested ahead of the auction and 10 people showed up on the day. The plan was to hold the auction in the garden to allow for maximum social distancing en plein air and perhaps to remind bidders of just how much garden they would be getting for their money. But bucketing rain sent the bidders indoors, where auctioneer David Bewley encouraged three parties to compete up to €1.2 million.

According to Rory Kirwan the buyers had been seeking a house in the area for quite a while, and had now “gotten a better one than any they’d looked at previously”, he said. Though Kilmuire doesn’t enjoy the same sea views as some of its neighbours, its garden faces south and the Dart is a five minute walk away.

Paul Flynn: I’d crawl over a mountain of nouveau-riche club sandwiches for a nice toastie
4

Sean Moncrieff: Covid has brought out the best in us. It still does
5