Developer in bid to deliver 105 apartments on Harbour Road site 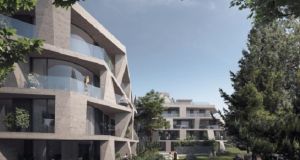 Francis Rhatigan’s company, Winterbrook, had a previous application for 56 units on the grounds of Charleville refused by Dun Laoghaire Rathdown County Council

As developer Richard Barrett awaits the outcome of a High Court challenge aimed at overturning An Bord Pleanála’s permission for his plan to build two apartments and three houses at Dalkey’s Bullock Harbour, he might well ask himself if he bought the right site at all.

For even as the lawyers for the Bullock Harbour Preservation Association and An Bord Pleanála prepare their arguments for the upcoming judicial review of the decision, developer Francis Rhatigan has entered into pre-planning consultations with An Bord Pleanála for a far more ambitious residential scheme on Harbour Road.

Having had a previous application for 56 units on the grounds of Charleville refused by Dun Laoghaire Rathdown County Council, Rhatigan’s company, Winterbrook, has signalled its intention to seek fast-track planning permission for 105 apartments on the same site. While there is no indication as of yet on whether the proposed units would be aimed towards the private rented sector (PRS) or traditional owner-occupier market, Winterbrook would appear to be in line for a significant return on its investment. The company acquired Charleville, a large building occupying a 1.77 acre site for €5.5 million in 2017.

Rhatigan will, of course, have been familiar with the property and its potential, having called Lota on nearby Coliemore Road his family home for many years . The developer sold the luxury seafront property to Kingspan chief executive Gene Murtagh for €7.5 million in a quiet off-market transaction in 2018. Rhatigan and his wife, Anne Marie, acquired the property at auction in 2002 for €4.5 million.

But while Barrett might well salute the Winterbrook chief’s ability to navigate the choppy waters of the Dalkey property market, his company could be in for a generous pay day from another site it owns in the seaside village.

Earlier this year, Bartra secured the green light from An Bord Pleanála for the construction of 18 apartments along with six houses on the 1.4 acre Maple Tree House site adjacent to the home of veteran broadcaster, Pat Kenny. The developer acquired the property for €3.1 million in 2018.