Gift from Saddam Hussein set for sale in Limerick fair 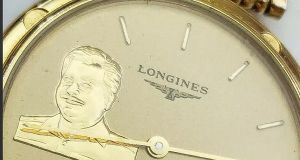 One of the more unusual offerings at the National Antiques Fair in Limerick next month is a gold Longines watch decorated with an image of Saddam Hussein. The timepiece was gifted by former president of Iraq Saddam Hussein to a member of the British Labour party at a dinner in Baghdad, according to Derry- based antiques dealer Gary McNicholl.

Ten delegates, including George Galloway, travelled to Iraq on a humanitarian aid mission. “The aim of the programme was to feed Iraqis and prevent Saddam reassembling weapons of mass destruction. However, this turned into quite a controversial affair which makes this watch a collectible and rare piece,” says McNicholl.

The watch is accompanied by Saddam’s personal business card – made from a thin sliver of wood – in its original envelope, with the name of the original recipient which McNicholl is not divulging for privacy reasons.

What makes the watch interesting – besides being a classic gold Longines – is that the face is embossed with an image of Saddam Hussein along with the Arabic inscription: “It was made from the weapons of the glorious martyrs of Saddam’s Qadisiyah.”

Iran became known as “Saddam’s Qadisiyah” after the Arabs’ early Islamic victory over the Persians.

There are some watches for sale online bearing the face of the dictator, who was executed for crimes against humanity in 2006, but it has been reported that these “Saddam watches” have had war-related pictures added to increase their value.

The watch for sale in Limerick has an asking price of €5,000.

Other vendors a the fair will include established members of the Irish Antique Dealers Association, and traders in vintage offering everything from old platters to fine furniture, designer clothes and ephemera.

“We have dealers from every walk of life: magistrates from Northern Ireland, ex-presidents and former founders of the IADA, a chief constable of the RUC, an architect and an ex-sea captain alongside housewives, and collectors of every description,” according to organiser Robin O’Donnell.

One trader, Brendan Laffan (27), has been selling at fairs for the past year and a half. Blind since birth, his love of antiques started in his formative years. “As a young lad I would go to the auctions and listen. I really love the feel of old things, and have learned to tell the difference between china pieces by feeling the raised patterns.”

His offerings at the fair will be Royal Doulton platters, pieces of Lladro and Belleek, in addition to teapots and home ware.

Laffan, who also volunteers as a disc jockey at west Limerick 102FM radio station, says of the fair: “Even if I don’t sell anything it is so full of interesting people and unusual things I’m just as happy to meet people and chat.”

Now in its 29th year, the National Antiques Fair, with over 75 stands, will take place in the South Court Hotel in Limerick on the weekend of November 9th and 10th.