Location and relative scarcity in this area are the major plusses of this bright, well laid-out three-bed home 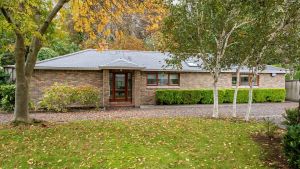 Property watchers looking for an example of the extent to which prices in some parts of the capital are oceans adrift of country prices could cite The Bungalow, which is new to the market and seeking €1 million.

The plainly named Dublin property is a three bedroom, detached brick bungalow built in the 1990s with 120sq m (1,292sq ft) and a small garden – similar in style to so many others around the country although they would probably come with larger private gardens.

But two features make it a different property proposition from its country cousins: location and its scarcity value in its likely market.

Around 1990 a small development of nine apartments was built on a site previously occupied by houses at 50-52 Nutley Road. The short tree-lined winding road links Ailesbury Road with the busier Nutley Lane in the heart of Dublin 4.

It was a low density, low height, well-designed build that left good space for parking and surrounding greenery and the developers also took the opportunity at the time to build a bungalow on the site to the rear. While most of the apartments have been lived in by owner occupiers, The Bungalow has been a rental.

Well-heeled would-be downsizers are an increasingly active segment in the market particularly in Dublin 4 and neighbouring Dublin 6 where there is a demand for – but a scarcity of – bungalows, often a preferred style for older buyers keen to future proof their purchase.

The Bungalow ticks that everything-on-one-level box but also security, another feature high on many downsizers’ list. The development is set behind electric gates and there is plenty of parking.

Presented to the market after a paint job and smartly staged for sale it is a bright, well laid-out house with the living room, dining room and larger bedrooms opening out to the rear where there are floor-to-ceiling windows in contrast to the smaller windows at the front.

Buyers will do work – the small kitchen to the front could do with an upgrade as could the bathroom and en suite. The D2 Ber might also prompt some energy efficiency upgrades. As The Bungalow is part of a managed development there is an annual service charge, of €2,600.

The Bungalow (buyers might also go for a fancier name change) is for sale though Lisney.