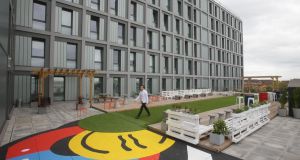 The Brexit crisis means the UK may not be the first place you would think of for leading by example. But London may still have a thing or two to teach Dublin and Ireland’s other main cities when it comes to making the best use of land for the development of housing.

And so we see the Irish Planning Institute has taken the opportunity this week to lead a delegation of some of Dublin’s most senior planning officials to the UK capital to see the latest developments in the areas of co-living and dockland regeneration.

Among those taking part in the fact-finding trip are several directors and members of An Bord Pleanála, as well as planners from all four Dublin local authorities. They have a packed schedule between now and Friday evening. The visit kicked off last night with a presentation and tour of The Collective’s coliving space at Canary Wharf, in the London docklands.

Thursday’s proceedings include another presentation and tour of the East Village build-to-rent neighbourhood. Set on 27ha (67ac) of parkland, the scheme may well be familiar to sports fans, having been developed originally as the athletes’ village for the 2012 Olympic Games.

The beauty or otherwise of the coliving model returns to the agenda later today with a tour of the Collective’s Old Oak project. Developed on a previously derelict site and a 1970s office block, the scheme comprises 323 units of double and en-suite rooms, along with new offices and business-incubator space.

Minister for Housing Eoghan Murphy will be on hand tonight to offer his thoughts on urban densification at an event hosted by the London Irish Town Planners’ Network in the regenerated hipster haven of Spitalfields. Other speakers will include An Bord Pleanála’s director of planning, Rachel Kenny, and the chief executive of the Royal Town Planning Institute, Victoria Hills.

Following a presentation on urban regeneration and brownfield development tomorrow morning, the developer Sean Mulryan’s Ballymore will be on hand, hosting both a networking lunch at its City Island scheme and a tour of its enormous Royal Wharf development.