Bumper crop of paintings by Jack B Yeats in autumn sales

Sales in London and Dublin include 11 paintings, some bought directly from Yeats 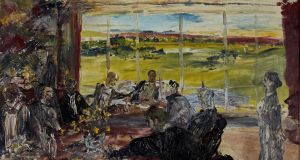 Over the coming weeks, 11 paintings by Jack B Yeats, one of Ireland’s most acclaimed artists, will fly between London and Dublin in advance of three upcoming sales with some works appearing for the first time at auction.

Jack Butler Yeats RHA was born into a prominent artistic and literary family. His father was the well-known painter John Butler Yeats, his younger brother William won the Nobel Prize for Literature, and sisters Lily and Lolly founded the embroidery department of Cuala Industries and Dun Emer Press respectively. The artist himself won Ireland’s first Olympic medal for the Irish Free State for his work Liffey Swim at the 1924 Olympics in Paris, which is celebrated this year in a commemorative stamp by An Post.

Two works by Yeats are included at the forthcoming Morgan O’Driscoll sale at the RDS on October 21st.

The Derelict Ship (€150,000-€250,000), now on the market for the first time since 1987, is evocative of the artist’s childhood in Sligo, where Yeats was raised by his maternal grandparents. In his later years, he wrote to the mayor of the town: “From the beginning of my painting life, every painting which I have made, has somewhere in it a thought of Sligo.”

Sotheby’s Irish Art sale on November 19th in London, will feature three paintings by Jack B Yeats in the 106 Irish works, which have a combined lower estimate of €3.1 million.

A Paris of the West, which caused some excitement when it was bought by the celebrated American theatre actress Katharine Cornell in 1948, is seeking €565,000-€905,000. It is described by the auction house as “being one of the most significant paintings by Jack B Yeats to appear in recent years”.

The Sotheby’s sale also lists Paul Henry’s Clare Island from Achill, which is making its first public appearance in almost a century, since it was sold to Geoffrey Thomas Tayleur (€90,500-€136,000).

Dublin auction house Whyte’s, in association with Christie’s of London, will hold the Ernie O’Malley Collection sale on November 25th at the RDS.

Highlights of the sale are six pieces by Jack B Yeats which were purchased directly from the artist by O’Malley.

Mayo-born O’Malley, a republican fighter in the War of Independence, went on to become a writer and spent his life after his marriage (and subsequent divorce) to American heiress and sculptor Helen Hooker, devoted to the arts.

A close friend of Yeats, he championed many Irish artists during the early part of the last century, and in 1945 organised a Yeats exhibition, which included loaning his own artworks and writing the exhibition catalogue.

After O’Malley and his wife Helen Hooker O’Malley – who was a sister-in-law of industrialist JD Rockefeller – separated, she approached the Irish government in 1978 with a view to donating 600 works of art to the State to be shown in a museum dedicated to her ex-husband in Castlebar.

This never came to fruition and instead the works found a home at the University of Limerick. An exhibition of her photography from the 1930s, A Modern Eye: Helen Hooker O’Malley’s Ireland, is on display at the National Photographic Archive until November.

The six Yeats oil paintings in the Whyte’s/Christie’s sale include The Enfolding Night (€500,000-€700,000), one of several existential subjects the artist painted in the late 1940s, and Death for Only One (€400,000-€600,000) depicting a man standing over a corpse, evocative of his admission that he belongs “to those who belong to a spirit land”.

It is quite a body of Yeats work to come to the market between the three auction houses in a relatively short space of time but for anyone who has a sizeable budget to spend on art, it is has the potential to be a significant private acquisition of one of Ireland’s greatest painters.

Not guilty by reason of insanity: Inside the Central Mental Hospital