For families trading up, Stillorgan’s supply of semis with space to extend is appealing 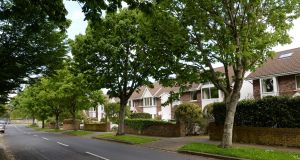 The larger homes, on roads in and around Grove Avenue and Stillorgan Grove, are also known for their large gardens. Photograph: Dara Mac Dónaill / The Irish Times

Like many other areas of south Dublin, Stillorgan was very much a small village on the outskirts of the city, until large-scale building took place in the 1950s that turned it into an urban area in its own right. Fresh waves of development took place in the 1960s and on through to the 1990s when the first homes were built at Stillorgan Heath, a large-scale estate close to Sandyford.

With parts of Stillorgan bordering on Blackrock and Mount Merrion, the neighbourhood offers a slightly more accessible point on the property ladder.

“The areas surrounding Stillorgan – Mount Merrion, Blackrock and Foxrock – are all more expensive, with Stillorgan cheaper to buy in but, in my opinion, offering more as a town,” says Brian Dempsey, partner of DNG and president of IPAV.

“Stillorgan is very much a middle-class, affordable, yet desirable suburb,” says Eoin O’Neill, owner of Eoin O’Neill Property Advisors. “You can get a three-bed in Stillorgan starting in the late €400,000 region.”

The majority of homes on the market in Stillorgan built post-war in the 1950s and 1960s are large, three- and four-bed, semi-detached homes, and also some terraced, in locations such as Dale Road, Hazel Avenue and Anville Drive.

The middle range of the market offers larger family homes, both semi-detached and detached, and a number of bungalows, with many built from the 1990s onwards – Stillorgan Heath being indicative of this type of construction.

Both Blackrock and Stillorgan saw apartment developments first spring up in the 1960s and 1970s, such as Woodview Court. The Celtic Tiger era saw a larger number of apartment complexes constructed, spanning from one bed to three beds, including duplex apartments and penthouses, with developments such as The Grange and Beechwood Court.

The top range offers five-bed homes, many of which are Victorian builds, set on land parcels with large rear gardens and gravel driveways, with hedging largely shielding homes from direct view of the road; these larger builds are most common on the east side of the N11, which borders Blackrock.

The larger homes, on roads in and around Grove Avenue and Stillorgan Grove, are also known for their large gardens, which have made the homes especially appealing purchases for large families.

The exact borders of Stillorgan are up for debate. However, the consensus would largely be that the town fans out from the village located on the N11 dual carriageway. East of that road, down Stillorgan Park Road is felt by many to be Blackrock; however, the properties at the western end of it, and spanning along Stillorgan Grove south as far as Beech Park are considered by many to be Stillorgan.

This porous area extends north along Grove Avenue up to Mount Merrion Avenue, with the parcel of land west of that thought to be Stillorgan. This is also the most expensive and beautiful part of the town, with many large, detached homes, landscaped common areas, and Foxrock-style, yellow-stone, wall boundaries located throughout it.

On the far side of the N11, Stillorgan is thought to stretch out along the Lower Kilmacud road as far as Redesdale Road veering up to the north, then west via the Trees Road, back to Stillorgan Road. The south-western border is Drummartin Road with the lands of and around Lakelands, and as far east as St Raphaela’s Road, the Stillorgan Reservoir and Brewery Road all within the boundaries, with Sandyford on the other side of the divide.

What’s the price range for homes?

Large semi-detached and detached homes then form the top of the market, and range widely, starting circa €575,000 and rising to €950,000.

Buyers, for the large majority, tend to be Irish, but there are a number of Chinese and western European buyers – notably Spanish and Italian, as well as a number of Polish purchasers.

The town’s road connections are excellent. The N11 artery runs right through the town, giving direct access to Donnybrook and on into Leeson Street, St Stephen’s Green and The Liberties. The other way the road brings one down to the sunny southeast and the many towns and villages dotted down the Wicklow and Wexford coast. At the western end of the town, on the fringes of Sandyford, the Luas green line runs via Dundrum, Milltown and Ranelagh into St Stephen’s Green.

As with transport, Stillorgan and the surrounding area is exceptionally well served by schools, both private and public: Blackrock College, Mount Anville, Loreto Foxrock, Oatland College, St Benildus College, St Brigid’s, St Laurence’s and St Raphaela’s are all schools that garner nods of respect from education professionals. The town also has a College of Further Education and is walking distance to UCD’s Belfield campus.

The central focus is Stillorgan Village centre – Ireland’s first shopping centre, which was opened by pop star Dickie Rock in 1966, with free parking, which is still the case today.

Renovated in recent years the centre has a good variety of outlets, including a refurbished Tesco, Donnybrook Fair, Fenelons butchers, Starbucks, Dunnes Stores and Kilkenny Shop. Meanwhile heading towards Oatlands school is another strip of shops including the excellent DD-2 boutique run by Debbie Dettling. Then all along the Lower Kilmacud Road stretch there are more outlets such as Stillorgan Decor – a mecca for home renovators – DID Electrical, Kingstown Motors, FitzCycles and the Celtic Star Dance and Fitness Studios.

Stillorgan has its own cinema, the Odeon, and for eating out there are some good options. Gotham South does decent coffee, burgers and pizza, while The Orchard, in a large, thatched bungalow, is famed for its stew and carvery-style grub. Riba Café and Restaurant is also up there as a choice eatery. For family occasions there’s the popular Beaufield Mews.

Right in the heart of town is Kilmacud Crokes, a GAA club of high standing in the game. In existence since 1959, they’ve won the All-Ireland club football title twice, along with four Leinster, and seven Dublin titles, and have produced a string of high-profile Dubs over the decades.

The landscaping of southeast Dublin is green by its very nature, with public green space incorporated into many estates; however, large parks are somewhat absent in the immediate Stillorgan area, bar Clonmore Park. Deerpark, in neighbouring Mount Merrion, would be many locals’ choice for the best open space.

Any new developments coming up?

Johnny Ronan’s Treasury Holdings previously owned the shopping centre, as well as the Stillorgan Leisureplex – Bruce Springsteen’s bowling alley of choice when in Dublin, as well as Ireland’s first bowling alley, opened in 1963 – and also the former site of Blake’s Restaurant and Bar, which occupy three of the four corner sites of the Stillorgan crossroads.

Ronan’s plan was to rebuild all three sites into one giant shopping complex, with tunnels connecting the three under the intervening roads and create a design structure akin to Dublin Airport’s Terminal 2. But when the recession struck, these properties went into the possession of Nama, with each being sold off separately.

Kennedy Wilson has recently rejuvenated the Stillorgan Shopping Centre to the tune of €15 million, it also owns the Leisureplex and has plans to develop it into a mixed-scheme development, subject to planning.

Across the road on the Blake’s site, and the adjoining former Esmonde Motors site, Cairn Homes has had planning granted for 598 student bed-spaces, as well as 103 homes, a sports centre and retail space. It is, however, a development that has created some criticism for a lack of adequate parking spaces and family accommodation.

Four-bedroom semi facing a large communal green at 6 Lakelands Lawn for sale at €625,000 through DNG.