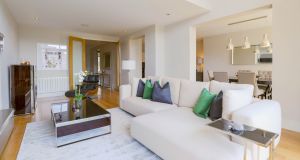 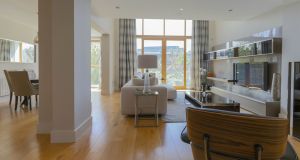 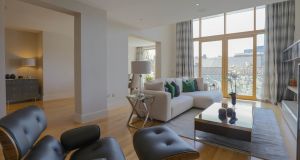 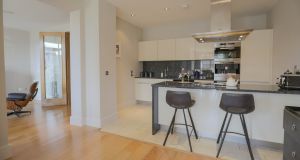 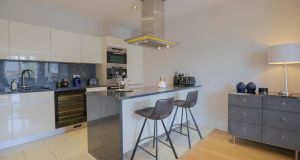 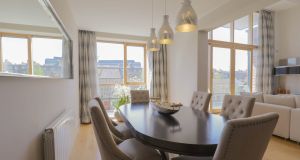 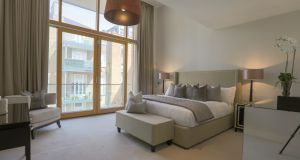 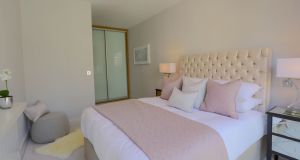 A city-centre luxury three-bed apartment that’s the same size in terms of floor area as a large four-bed suburban house is a relatively rare thing, and so even though its price – €1.35 million – puts it at the top end of the market, there will likely be strong interest in number 24, 18/21 Lower Mount Street, in the middle of Dublin.

Some years ago a major development saw part of a terrace of Georgian houses on the street between the Grand Canal and Merrion Square converted into apartments with a new, contemporary-designed block built to their rear for additional units, a courtyard communal garden and underground car parking.

Number 24, with 172sq m (1,851sq ft), is in the new block and it can be entered via the original Georgian door, giving it a grand entrance on Lower Mount Street or to the rear from Verschoyle Place.

Accessed by stairs or a lift, number 24, a second-floor apartment, opens into a large hall with good storage. The apartment runs from the front to back of the block with floor-to-ceiling windows looking out onto the internal courtyard on one side and Verschoyle Place on the other. There are three double bedrooms, two with ensuites plus a family bathroom.

Double-glazed doors open from the hall into the open-plan living space – a spacious bright area that’s double height in parts, and with access out to a balcony. It is made up of a large livingroom that is partially divided from the dining and kitchen areas.

Most recently number 24 has been an embassy let – to the Croatian ambassador – which gives an indication of its quality features. They include, apart from size and location, good security in a quiet, settled development, and space for entertaining.

The apartment has been revamped for sale, so for an investor it’s a ready-to-go let. Or, as is equally likely, for downsizers it is in move-in, turnkey condition.

What may make some buyers take a step back is the annual service charge – of €6,300 – and that it comes with only one car park space in the development’s underground car park, a skimpy enough provision for a three-bed unit. Haines is the selling agent.