Property on fringe of Portobello is small but cleverly laid out and earns €5,735 from signage 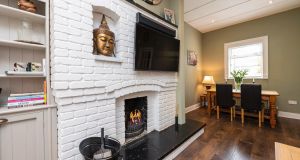 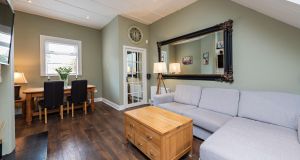 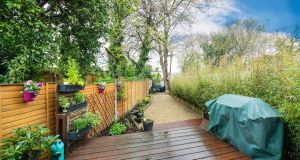 Number 138 South Circular Road, an end-of-terrace property that lies next door to McCann’s Builders Providers, is just a stone’s throw from Leonard’s Corner. The property was overhauled by previous owners who added an extension to the rear, which is now used as a third bedroom.

The current owners upgraded the property, adding new floors at ground level in addition to a second bathroom, new boiler and extra insulation.

While not particularly large, the 80sq m (861sq ft) of space is cleverly thought out, and an inner hall door along with double-glazed window provides an impressive noise solution to traffic from the busy road outside.

The front rooms were amalgamated to form a living-cum-dining space, which has a service hatch to the kitchen. A brick hearth with an open fire, while not original, creates a nice feature in the room. This space would benefit from changing the green on the back wall to a brighter colour to help reflect internal light.

The property has two bathrooms, which is unusual for a house this size, and also a separate utility behind a rather quirky blue door.

The third bedroom at ground level, opens out to a long but narrow back garden, which has a wall of bamboo leading to an outdoor seating area. This bedroom could also work as a further living room due to its aspect.

The house has an annual income of €5,735 from gable signage overlooking the builder’s providers, which would go a long way to the property’s annual running costs.

FaceTiming Pamela Anderson: Nothing can prepare you for this
10

We’ve got new lockdown rituals, but man, I miss the old ones
Real news has value SUBSCRIBE