Fancy a pub or pulpit? This D8 monster salvage sale has just the thing 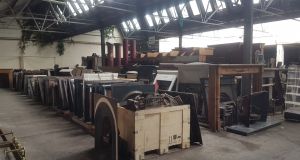 Step inside BG Salvage, on Dublin’s South Circular Road, and you enter a world where the laws of time and space appear not to apply. Look up and you’ll be greeted by a set of working traffic lights suspended from the ceiling: beyond that, a huge sign welcomes you to a Victorian fish market. Turn left and you find yourself in the first of three eerily empty bars with mahogany fittings, taps and - in the case of the final one – bright blue neon lighting.

The narrow corridors are crammed with items, so many that it often takes a second glance to make sense of what you’re seeing. Stained glass fanlights. Vintage school desks. A Super Shell petrol pump, its light still on, its gauge reading: “47 shillings and 11 pence”. Enamel signs. A massive pair of carved Indonesian doors. A portrait of Jimi Hendrix. A chess set whose kings must be a foot high.  The pulpit and organ from a Welsh church. Entrance doors from the Grafton Capitol Hotel.

And that’s just one of several sheds on the enormous site; another, devoted mainly to wood, is packed with floorboards, planks, sash windows, church pews and carved banisters. Still another contains cut stone; thousands of lengths of cut Wicklow granite, corbels and pallets of reclaimed Victorian, Edwardian and Georgian bricks. There are fireplaces and Belfast sinks, chimney pots and cast iron railings.

All of these items are being sold off as the company’s business shifts to the supply of film sets and props: BG Salvage has signed a long-term contract as a Hollywood set-dressing hire company. The items will be sold in a four-day clearance sale on May 18th-21st.

Memorabilia from the yard’s previous small-screen jobs form part of the sale.  Fans of the TV drama series Ripper Street will recognise the Coal Merchant builders and ironmongers sign, Lot 3486, (€100-€150) and the white enamel mortuary slab which was almost a character in its own right (Lot 916, €500-€800).

The bar from TV3’s soap opera Red Rock (Lot 867, €1,500-€2,500) will also come under the hammer, along with many significant chunks of Dublin’s architectural history: railings from the Pearse Street side of Trinity College, rivetted steel beams and a set of doors, complete with wheels, from Boland’s Mill. There are ledgers and other items from Clery’s department store, a set of cast-iron columns from the original Jervis Street building and a pair of stained-glass windows from the demolished church at St James’s Hospital.

In partnership with Damien Matthews from Matthews Auction Rooms in Oldcastle, Co Meath, Ryan has had the mammoth job of valuing the 4,000-plus lots in the sale. “I was here for three days working on the catalogue, and I still didn’t know you could turn right just up here,” he says, as we wander into yet another corner of the expansive five-acre site.

While many of the pieces in the yard have a straightforward function and provenance – teak panelling from the roof of the Student Hub at DCU, for instance, or four windows from the Sutton house of former president Patrick Hillery, with their original sash weights – others are utterly mystifying. Ryan indicates an object which might be a christening font, except that it’s taller than our heads. “What is that?” he asks. We study it for a few minutes, but eventually have to move on, none the wiser.

The mammoth auction at BG Salvage will take four days to complete, with 1,000 lots scheduled for each session. Ryan and Matthews will each auction 200 lots in turn and the action will be fast and furious, so advance viewing is recommended. The site will be open for public viewing on Wednesday and Thursday (May 16th and 17th) from 10am to 5pm, and on the mornings of the sale from 9am.