With little doing in the winter garden, plot a visit to some of the world’s most beautiful gardens 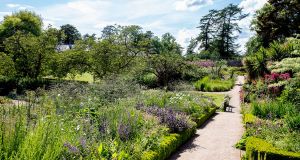 Situated in the “kingdom of Fife” in east Scotland, the gardens of Cambo House have been in the ownership of the Erskine family since the late 17th century. A charming meld of old and new – Victorian-style glasshouses and neatly clipped box-hedges sit happily alongside giant swathes of Piet Oudolf-inspired prairie-style planting – the gardens are under the expert charge of head gardener Elliott Forsyth. While at their glorious best in summer, these Scottish gardens are also well worth a visit in the depths of midwinter as Cambo’s 70 acres of woodlands are home to a National Collection of over 350 different kinds of snowdrops, with an annual Snowdrop Festival – this year’s runs from January 27th to March 11th – held in their honour. For those who’d like to make the most of their visit, the estate also offers a range of accommodation (camboestate.com).

The Dutch garden designer Jacqueline van der Kloet has earned an international reputation for her artful, elegant planting schemes, which can be seen in public gardens around the world including Holland’s Keukenhof and the New York Botanical Gardens. Her own garden, Theetuin (The Tea Garden) at Weesp near Amsterdam, which has been over 30 years in the making, is a truly charming space that showcases van der Kloet’s impressionistic use of colour and her love of naturalistic planting schemes using massed displays of perennials and bulbous plants contained within a matrix of trees, shrubs and hedges (theetuin.nl).

Cosseted by the warming effects of the Gulf Stream, Cornwall is home to many famous gardens – Tresco Abbey, Heligan, The Eden Project among them – but the wonderful 20-acre woodland gardens of Tregrehan are still something of a closely guarded secret. The creation of many generations of passionate gardeners, Tregrehan was originally planted as an arboretum and the variety of trees that grow there today includes over 170 National Champions (trees considered to be outstanding by virtue of their size or age). It’s also home to an outstanding collection of rhododendrons, camellias, magnolias and choice southern hemisphere species including giant tree ferns and other unusual exotics. A highly respected planthunter, Tregrehan’s present owner, Tom Hudson, continues the garden’s long tradition of expert planstmanship (tregrehangarden.uk).

Considered one of the United States’ greatest gardens, Chanticleer, near Wayne in Philadelphia, was created by the Rosengarten family over the course of much of the 20th century. Gifted to the public in the 1990s and now managed by the Chanticleer Foundation, it continues to evolve under a team of expert gardeners. There’s something in this 48-acre garden to please everyone, from the tropical planting of the Teacup Garden and the Chanticleer Terraces to the more subtle beauty of its Asian Woods and Bell’s Woodland and the charms of the folly known as the Ruin (chanticleergarden.org).

Planted by the Lebellegard family in memory of their daughter Angélique, the three-acre Jardin de Valérianes is located near Rouen in the heart of Normandy countryside. Expect wonderful planting combinations set against the picturesque backdrop of the garden’s  17th-century manor house (jardindevalerianes.e-monsite.com).

The privately owned gardens of East Ruston Old Vicarage in Norfolk are designed as a series of outdoor “rooms”, each with its own distinct identity. Continually evolving under the creative direction of owners Alan Gray and Graham Robertson, it encompasses 32-acres and includes everything from conventional mixed borders to desert-style planting, exotics, an apple walk, a walled garden, a potager, topiary, water features and much more, all designed with the theatrical flourish that has become its hallmark. (e-ruston-oldvicaragegardens.co.uk)

Created within the ruins of a medieval town located about 65km southeast of Rome, Ninfa has been described not only as the most romantic garden in the world but also as one that’s earned itself cult status amongst the gardening cognoscenti. A magical place of picturesque ruins, trickling springs and shady, tree-lined streams, it’s filled with cascading roses, giant cypresses, magnolias and flowering cherry trees. One of the best times to visit is in late spring but do make sure to make a reservation first as admission is strictly limited and permitted only as part of a guided tour (www.fondazionecaetani.org).

For guided tours by expert Irish gardeners of some of the gardens mentioned above, see the websites of The Travel Department (traveldepartment.ie) whose tour guides include professional horticulturists Frances and Iain MacDonald of The Bay Garden in Wexford, and of Jimi Blake, owner of the west Wicklow garden Hunting Brook (huntingbrook.com), who also runs a series of guided tours of some of Europe’s best gardens.

While the cold, wet weather is a sign to hold off from any digging/mowing in the garden, there are plenty of other jobs that can be carried out now in order to save you time later on in the season as things begin to get busy. An example is preparing for the busy propagating season ahead. So start collecting/ordering and cleaning seed trays and labels, as well as ordering seed compost so that you’re ready in plenty of time for some of the busiest months of the gardening year.  For a good quality, organically-approved peat-free seed compost, look for Klassmann’s (available to order from quickcrop.ie and fruithillfarm.com).

Hellebores are one of the brightest stars of the winter garden, especially if given a little loving care at this time of year. Now’s a good time to remove their damaged/discoloured evergreen foliage, using a sharp secateurs to cut the faded leaves right back to the ground while taking extra care not to damage any emerging flower buds. Not only does this improve the appearance of the plants but it also helps to avoid problems with damaging diseases.

If you love your curries  fiery-hot or enjoy your scrambled eggs with a touch of home-grown heat, then now’s the time to order seed of chilli peppers for sowing in early February as these tropical plants need a long growing season in order to be properly productive. Recommended seed suppliers include Cork-based Brown Envelope Seeds (brownenvelopeseeds.com), whose range includes “Bolivian Hairy”, a reliably perennial variety that owner Madeleine McKeever promises will put hairs on your chest, while for something milder, try the Slovakian variety “Goat Horn” or the early “Czech Black” (Other specialist suppliers include  nickys-nursery.co.uk and southdevonchillifarm.co.uk.

Seán Moncrieff: I’m sick of hearing this is the new normal
3