All together now: NY style co-living comes to Dublin 2

Unlimited coffee, a sense of belonging and some cracking interiors aim to lure the millennial renter in Fitzwilliam scheme 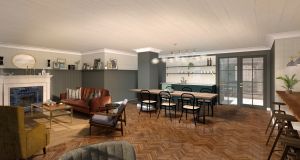 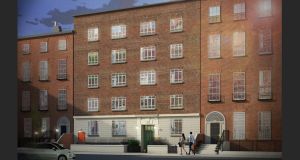 Co-working spaces have been the big success story of the office scene in Dublin over the past five years, and now co-living looks set to take off as the new way to rent, with a company called Node opening its first Dublin property on Upper Pembroke Street, close by Fitzwilliam Square, this March.

The Node co-living philosophy centres around small but cleverly designed developments in covetable locations, where residents live in their own apartments but have access to community life is nurtured through communal areas, a curated activities programme and a tight-knit residents’ network. Think student dorm living meets Soho House membership.

The brainchild of Canadian property investor Anil Khera, Node aspires to be a salve not just to the rental crisis in Dublin but also an antidote to what Khera says is a broken global property model. “Take your average 100 residents living in one apartment block, with multiple landlords, all with different agendas and little interaction – it’s a recipe for isolation and disconnect. It creates a silo society and perpetuates divisions between professions, classes and nationalities. With Node, we hope to re-imagine how people live and bring back lost community values.”

Having successfully launched three Node schemes in Brooklyn, New York, and London over the past two years, Khera is now rolling out in Dublin, Los Angeles, Seattle and Toronto this year – all cities which were chosen for their millennial-centric workforces and their entrepreneurial hearts, he says.

Having spent many years working with the multinational asset management group, Blackstone, Khera gets how global our capital city has become. “Dublin is full of smart creatives who are shaping the world we live in and who live global lives. Node is aimed at this cohort of 25-35 year olds, both Irish and internationals alike – the new creative class as I call them. They’re upwardly mobile, have some financial resources, but little local knowledge, or even furniture. They may only be planning on staying in Dublin for a few years on their career journey but while they’re here they want to be somewhere hip, central, hassle-free and feel connected. ”

Node Dublin, designed by local architects NDBA and international firm DesignAgency, comprises a 51-bed residence of two and three-bedroom apartments ranging from 60-75sq m each. All apartments have an open-plan kitchen and living space and each bedroom has an en-suite or dedicated bathroom. There are plans for a large communal lounge and dining area, replete with massive flat screen and a stunning rooftop terrace with views towards Fitzwilliam Square and the Mary Poppins roofscape of Dublin 2.

The interiors throughout are predominantly mid-century but a Georgian Dublin aesthetic also prevails, with the original winding staircase being retained, antique brass accents and deco-style fireplaces.

Each apartment will be be ready furnished with West Elm-style furniture, Hygge accessories, gallery walls, a retro SMEG fridge, top-end appliances and industrial bathroom fittings. Nest and Sonos smart systems and super high-speed Wi-Fi are also a staple of every apartment.

But while location and design are two of the brand’s main pillars, at Node’s core is community and connectivity. “Loneliness and anxiety are still on the rise – technology has caused so much isolation, the new generation of workers, many of whom are freelance, are yearning for human connection. And if you’re coming to live and work in a new city, it can take a long time to integrate and find your tribe and Node helps ease that transition immensely,” says Khera.

Node’s mission is to help residents or Nodies (their residents’ moniker) become friends by organising community programmes in the house, which could be anything from a wine-tasting evening to a barbecue on the roof terrace. Nodies are also encouraged to get involved in local neighbourhood life, and are plugged into different activities of interest such as the local arts scene, sporting events, farmers’ markets, festivals or volunteering with charities.

Keeping the residents happy and integrated is the task of the full time “community curator” assigned to each scheme – a kind of bean an tí and a hotel concierge hybrid. By next year, Node expects all members of its ever expanding portfolio will be conversing digitally, creating a global Node community that will grow organically and include anything from tips on visiting a new city to doing global flat swaps or housing other Node residents at one’s home.

While Node may be first off the block with a co-living scheme in Dublin, it’s not first to market globally. In the States, there are many similar and successful co-living models such as WeLive, Common, the Nook, Roam. The Medici Living Group operates in Europe, while Seedspace is putting down roots in HongKong. “We’re not claiming we came up with the concept. In fact, if you look back through history, we’ve been co-living in different guises for centuries: from monasteries to the kibbutz, from boarding houses to student residences – we are just making a more convenient, comfortable, luxury version of it,” says Khera.

What it all costs

So how much will it cost to shack up with the Node gang? Rents range between €1,200 and €1,500 a month per bedroom, depending on whether you are in a two- or three-bedroom apartment. There’s a minimum requirement to sign up to six months’ lease and rent includes all bills, amenities and community perks too. However, getting in the door is not as simple as handing over a deposit and first month’s rent.

“The co-living concept is designed to bring a diverse group of creative, locally and globally-minded people together. So, prospective residents must apply through our site, where we ask you to tell us why you want to live in Node and we also ask for access to your social media profiles. Our community curator will then meet all prospective residents, show them around the property, get a sense of the applicant and vice versa,” says Khera.

“We try to have a balanced mix of gender, professions and personalities in each scheme but at the same time we don’t over-engineer it. The community tends to grow together organically so we enable that as best we can and our community coordinator will also help to match residents with suitable roommates (if needed).”

There’s another perspective Node on the horizon with Khera eyeing up a property in Smithfield, and given the recent arrival of WeWork to Dublin, we’d take a punt WeLive will be clipping at Node’s designer heels soon. Let’s watch this (interior designed) space . . .