Only 8% of Docklands renters are Irish, says estate agent for tech giants 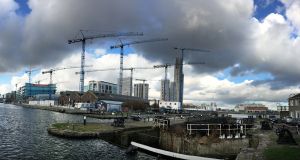 Just 8 per cent of renters in Dublin’s Docklands are Irish, says estate agent Owen Reilly who is a property specialist in the Dublin 2 area.

Reilly’s comments come in the wake of the IDA revealing that employment by foreign direct investment companies in Ireland has reached its highest level in history, with 210,443 people employed in Ireland by such companies, surpassing a five-year target of 209,000, set by the IDA in 2015.

“Only 8 per cent of our tenants in the Docklands are now Irish,” says Reilly, who sources homes for workers in giant tech companies like Facebook, Google and Airbnb and big law and accountancy firms in the area.

That 27 per cent drop over a two-year period is not just attributable to the increase of FDI companies in Ireland, according to Reilly. He feels that a desire by Irish people to avoid the top-end rental prices the Docklands commands is seeing them look further afield.

“The figures do reflect the nature of foreign companies in the Docklands, but we feel more of an issue is the high rents and the Irish attitude to high rents compared to international people,” says Reilly.

“Irish people are reluctant to pay those high rents – even if they can afford them.

“There are a lot of high-earning Irish people working in the Docklands - in law and accountancy firms usually. In the last two years those Irish tenants have been leaving the area simply to move out to the suburbs.”

Non-nationals, who are attracted to the cosmopolitan and centrally located Docklands for a variety of reasons, have filled the vacuum.

“The non-Irish want to live close to their offices and they usually don’t own a car. A lot of the apartments in the Docklands have just one car space, or, perhaps none, which makes them less appealing for the Irish, who often do have the extra costs of running a car,” says Reilly.

The average price for a rental in the area in 2016 was €2,300, a not insignificant number that has been kept from further peaking by the rent cap.

“Had it not been for the rent cap the rental figure would be higher,” says Reilly. “The average would have jumped to €2,400 or €2,500 otherwise. Rents are up 12 per cent but our portfolio of managed apartments are up only by 4.7 per cent due to those rent caps.”

The divide of non-national renters by nationality is diverse, reflecting the international nature of the companies now working out of the Docklands.

“Of the non-nationals, 35 per cent are Europeans, within that figure the highest represented countries would be the Scandinavian countries, Italy and Spain, ” says Reilly.

“From the other 65 per cent of non-Europeans, the leading countries would be the United States and Canada. ”

For those Irish leaving the area, there is no specific new catchment area mopping up the exodus, but rather a general move outwards.

“[Irish people move to] suburban south Dublin and north Dublin; they would also be moving to Dublin 8,” says Reilly.

“In most cases they are moving to cheaper rental locations because ultimately their goal is to buy.”

With shared apartment rental in Dublin 8 focusing around the €1,000 figure per room, a move from the east to the west of the city centre could net an approximate saving of circa €15,000 per annum.

“The non-Irish are more willing to pay that higher figure,” says Reilly.

“One has to factor in that most don’t have cars, this reduces transport costs, and also, often, their employers have catering facilities on site that gives them savings to put towards their rent.”

The length non-nationals tend to stay in situ is also generally longer than the average set during the years that Irish tenants were more abundant in the area, while non-nationals are also moving beyond the rental sector as they settle in Dublin.

“People in the area are now staying longer, the average tenancy period has more than doubled.

“We are seeing people who are working in Google and Facebook, particularly in Google, who have been there maybe up to ten years, putting down roots in Ireland, and buying in the Docklands area,” says Reilly.

“Other couples are moving a little further out. For example, we had one Italian couple who moved here thinking it would be for one or two years. Eight years later they have a little boy and have sold their apartment and moved to Ranelagh, where they intend to refurbish a house.”

Indeed, almost all couples tend to leave the area once they have children, with 90 per cent of the properties in the area lived in by couples or single professionals.

What property is for rent in the Docklands?

Rental prices start in Grand Canal Dock at €2,350 a month, which secures a two-bed, two-bath apartment over 75sqm in the desirable and chic Gallery Quay, known for its large, glass balconies looking out over Pearse Street and Macken Street.

For €2,400 one can secure a two-bed over 80sqm in Hanover Dock, on the corner of Forbes Street and Hanover Quay and near the string of high-end restaurants and bars that run along the northern edge of the Grand Canal Dock.

Up to €2,500 a month one can rent in Forbes Quay. Also two-bed and over 80sqm, this apartment has room-length, living-space windows and looks out over landscaped green space.

For between €3,000 to €3,150 one can live in The Marker Residences, in the Marker Hotel. These are also two rooms, but with three bathrooms, over 80sqm, but have added desirability due to design, location and access to the hotel’s gym, swimming pool and spa.

A three-bed costs €3,500 per month in The Camden on Charlotte Quay Dock for a penthouse with views out over Aviva Stadium and the Dublin Mountains. The property is set over 110sqm.