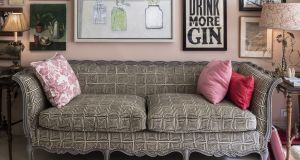 While the pendulum is swinging towards a more decorative and extravagant style of décor, Rita Konig’s low-key luxe remains rooted in real life. The daughter of decorating great, Nina Campbell, Konig is an interior designer working on projects in the United Kingdom and United States, and is also a columnist for House & Garden and European editor of T: The New York Times Style Magazine.

Her feed, which has more than 41,000 followers, sees her on site, photographing beautifully presented repasts as well as details of what catches her attention. She also does a good line in design advice and gives sound advice on hanging curtains, decorating bathrooms or choosing colours.

Her style looks effortless – as this shot of the sittingroom in her west London home shows. There are also some well-positioned shout-outs about her own collaborations including the book, A Place to Call Home: Tradition, Style, and Memory in the New American House by award-winning architect Gil Schafer.

Every week Derringer picks a house, apartment or workspace from around the world and showcases how the owner, architect or interior designer created a cohesive scheme. There are occasional posts about tech aesthetics, and she has a thing for well-designed car interiors, a combination which keeps her (almost) two million followers hooked. This highbrow account also has a sister account @dogmilk  too, a must follow for aspirational canines.

Who does Victoria Beckham call when she needs some design inspiration? Rose Uniacke, an antiques dealer turned interior designer known for her refined and fabulously expensive taste.

London-based Uniacke’s collection ranges from baronial style furniture made for moguls to the simplest of the lighting fixtures or the “tea corner” she designed for her own office that was hewn from a London plane tree and features a copper boiling water tap. Her feed is full of inspiring room sets where, often, a single piece of furniture such as a circular table, a desk, or a velvet-covered antique sofa makes a powerful statement.

Former editor of House & Home, Ciara Elliott packed up Dublin life in 2010 and moved her family into a picturesque but crumbling old farmhouse in the Colchester countryside. Since moving to the UK, she’s documented almost the entire renovation of the farmhouse on her Instagram account from the headaches of replacing sash windows to styling rooms with vintage finds and mid-century gems she finds at auctions.

Elliott is also a dab hand at upcycling knackered old pieces with a lick of paint and new handles and has even tried her hand at the odd reupholster project too.

The farmhouse’s garden, once belonged to artist Peter Coker who maintained it in a French Monet style; providing a great backdrop for lots of whimsical posts of Ciara and her family frolicking behind a sea of wildflowers.

Irish interior designer in Los Angeles, Grania Murray has her own brand of California cool which centres around Celtic heritage and holistic living.

She fills her account with images of current design projects, which range from Dublin’s Merrion Hotel, where she has working on the Cellar Bar, to homes in the Hollywood hills, highlighting the sourcing process of finding fabrics swatch to creating a stained-glass window. Murray’s camera is drawn to beauty or humour she finds in the mundane and her wicked sense of humour underpins her account.

American design doyenne Bunny Williams knows how a home should work. Having got her start under the tutelage of one of décor’s patron saints, Sister Parish, she is influencing the next generation, in particular Alyssa Kapito who set up a business with Vivian Muller in 2012, two years after the pair worked as interns for Williams.

Kapito has since gone out on her own and her understated elegance lets the period features and proportions of many of her clients homes sing. Kapito has over 96,000 followers. Her upper east side aesthetic mixes comfortable furniture with antiques and art. Every shot in her feed frames an utterly habitable home.

Trailblazing Spanish designer Jaime Hayon fuses industrial design with a love of ceramics to create covetable interiors that always includes a touch of whimsy. Boasting more than 83,000 followers, his feed gives followers a real sense of access into his working life from the creative process and just how he sketches the broad brushstrokes of his ideas to slick, colour-saturated finished ideas.

As a native Madrileño his feed is steeped in Spanish historical and cultural references including this enormous zebra-patterned ceramic bear, a nod to the city’s coat of arms.

For its inspiring eye candy Roisin Lafferty continues to lead the visual charge with a smorgasbord of colour-rich inspo from her travels to Marrakech, Miami and beyond. Many make it on to the mood board and have been implemented in some of the city’s latest apartment schemes, including the upscale Marianella in Rathgar and Hollybrook at Robswall, Malahide.

The are are many, many architecture practices to follow but New York-based practice Grzywinski+Pons, led by principals Matthew Grzywinski and Amador Pons, is one of those feeds blissfully devoid of corporate bragging. Instead it includes well-framed architectural postcards from his travels.

As well as private residences, restaurants and cafes it includes some cool contemporary hotels including Hotel on Rivington, which serves up peerless views of the city from the comfort of your bed and the recently opened Eden Locke, set in a Georgian mansion in Edinburgh’s New Town. Pictured is its bar and cafe. Currently listed in Surface magazine’s Power issue, its Leman Locke project was shortlisted for two AHEAD Europe Design Awards and a restaurant and bar design award.

The architectural practice 21 Spaces’s main focus is retail and the hospitality sectors but its feed offers snapshots of its projects, many of which include fun ideas that can be implemented in the home – from material mood boards to the custom, circular gold foil maps of Dublin, sourced by Newtownards-based art curator, Carrie Neely, and which have pride of place in The Alex Hotel.

If you’re feeling very bold and a fan of the track you could also implement its curved running track style LED lighting tubes – designed for Champion Sports flagship store in Cork – in your kitchen.

Designer Helen James grew up surrounded by decorative inspiration far beyond the traditional. With her father curator of Islamic art at the Chester Beatty Library, when it was sited on Shrewsbury Road, her eye was trained from when she was old enough to follow him around.

Following a degree in textile design at National College of Art and Design she worked for American designer Donna Karan’s homewares division for many years and on her return to Ireland she worked for Avoca before joining Dunnes Stores’s stable of designers where her Considered range shows off her confident mix of colour and texture and includes furniture and lighting, some of which is made in Ireland.

As a mother, designer, baker, gardener and author of A Sense of Home, her Instagram account offers a smart and well-curated feed that includes practical ideas for home and life.

It marries historical with contemporary. The company, which has more than 93,000 followers, is listed in Architectural Digest magazine’s top 100 designers and is a great source for lighting and material mixes.

So here I am, clutching my Happy Pear cookbook and crying into my dhal
9