Our heating system drops pressure and leaks from time to time. What can be done? 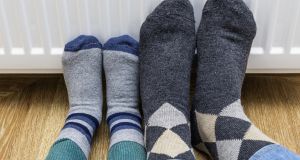 “The expansion vessel on your heating system clearly has failed as indicated by the weeping overflow when the boiler is in use.”

We have a pressurised heating system with three zones: hot water, upstairs radiators and under floor heating downstairs. The heating is oil fired and we are connected to a group water scheme.

We moved into our new build in 2009 and in 2014 we noticed the pressure on the system was dropping. It could drop from one and a half bars of pressure to 0 in two days. The plumber started by adding a leak sealer to the system and when that didn’t work valves were fitted on the circuits to try and isolate the problem. He couldn’t find a reason for the loss of pressure so we called in a company to test for a leak. The heating system was tested to three bars and there was no drop in pressure. After they left the pressure stopped dropping and stayed up for two years. Nobody knows why.

We have had problems with the cylinder also. It leaked at the thermostat for the solar panels (we have no solar panels yet) and a few years later there was a leak at the other thermostat. Now when we use the oil to heat the water, water drips and occasionally runs from an overflow in the hot press.

The heating system you describe is a fairly typical arrangement. The system has had a need for some repair and interventions in the past and I note that your original plumber has fitted additional ‘valves’. The pressure testing of the system in 2014 confirmed that the piping is watertight, but now some years later, you note that pressure is again being lost. The overflow weeps when the boiler is in use and this clearly indicates that there is a problem.

Heating systems are pressurised as this eliminates air and increases flow and efficiency. Most systems will not maintain this pressure without maintenance. You should be aware that a very small leak is enough to allow the pressure in the system to drop below the desired level. It is not surprising therefore that pressure is being lost. The fact that the system weeps or leaks at the boiler shows that there is an issue with the pressure on the system and this should be attended to immediately by a plumber.

At the first sight of a loose shirt button my mother was fond of repeating the mantra ‘a stitch in time saves nine’. She knew the efficacy of early intervention. In this case, the heating system needs immediate repair and maintenance, but maintenance should also be completed annually.

Most people do get their boiler serviced but they do not go to the next stage of checking for leaks or cleaning any debris which may have accumulated in the circulation system. Modern magnetic devices are a great help in removing ferrous silt and debris and I would recommend that you have your plumber install such a device. I would also advise that he checks the system for minor leaks at radiators and you should point out the various leaks you have identified. Once these have been repaired, keep an eye on the pressure valve and hopefully this will remain steady. Your plumber should also point out the ‘filling point’ on the system so that you can top up the water if there are small drops in pressure.

If pressure is being lost rapidly, then further, more extensive investigation would be needed. It sounds to me like this is a routine maintenance issue and clearly the expansion vessel needs pressurisation or replacement.

If you implement a planned maintenance regime on an annual basis, issues can be identified and dealt with in a proactive manner before these become bigger or costly issues.