Commuter hotspots: Wicklow is just an hour from Dublin and has a thriving food scene 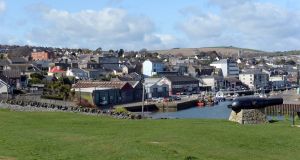 Connectivity: There are about five trains per weekday with a 75-minute travel time from Wicklow to Dublin’s Connolly Station.

Bus Eireann’s 133 can deliver commuters from the town to Dublin Airport in 1hr 45minutes. Wexford Bus’s 740A route can do the same journey in 90 minutes.

Those priced out of Greystones have begun to look south to Wicklow town, with its working harbour and decent train and bus connectivity says Catherine O’Reilly of local agent, Sherry FitzGerald Catherine O’Reilly. The growing popularity is reflected in the 400 new homes recently built here, she adds.

O’Reilly grew up in Greystones and says Wicklow, where she now lives, reminds her of what it used to be like. It is a small market town with heritage buildings that include its historic Gaol and lighthouse, and heritage shop fronts.

The town has an award-winning bookshop and family-run retailers that have been trading here for decades; the one-time watchmaker and jewellers TJ Gelletlie, who last year clocked up 200 years of trading in the town, is one example, while John P Hopkins Sons, aka Hopkins Toymaster, marked 190 years in business in 2017.

It’s a foodie centre too with its Taste of Wicklow now an annual two-day event, and since 1980 the biennial Round Ireland yacht race starts from and finishes here.

The town even has its own suburban seal, Sammy, who makes quite a splash when he leaves his harbour waters as often as three times a day to lumber across the road to the Lighthouse restaurant shamelessly rolling his big brown eyes to see what’s on the menu.

There are a lot of recently built schools – six primary and three secondary – to choose form. The bus service is excellent and comes with wifi as standard so work can be done in transit.

Prices for a three-bed start from €299,000 whereas the same style of property in Greystones would be in the mid-to-high four hundreds.

Prices for three-bed semis with convertible attics at Waverley Meadow, a scheme by Broomhall Developments in adjacent Rathnew – an area fast being assimilated into Wicklow town – start at €299,000.

Burkeen Hall by Cosy Homes is a small estate of 48 sizeable three-bed semis where there are four remaining units starting from €395,000.