King of the Hill in Malahide for €1.8m 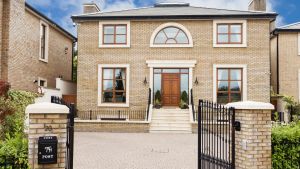 The two developments of Abington and Abbotts Hill in Malahide attracted well-heeled househunters when they were first launched in the early 2000s, so much so that they both became known as “Millionaires’ Row” in the coastal village.

They are still in demand almost two decades later. Since 2013, seven houses in both Abington and Abbotts Hill have sold for more than €2 million apiece.

Abbotts Hill was developed by Gem Construction who – in conjunction with Purcell Construction – were responsible for the painstaking €30 million restoration of St Mel’s Cathedral in Longford that was unveiled in 2015. Designed by Conroy Crowe Kelly Architects, the Malahide properties sold in 2002 for between €1.3 million and €2.2 million each depending on size.

The elevated site on which Abbotts Hill stands was in its heyday the old Malahide golf course. Today 40 homes of various sizes (including some trophy examples from the Celtic Tiger era) are now located on its 11 acres.

The houses vary greatly and it is difficult to compare prices here as sizes range from 2,800sq ft to 5,000sq ft for standard sizes within the 14 house types.

One of the benefits of the development is its location just beside the Grand Hotel, so it is just a short stroll to the village, and the 11 acres for just 40 homes allows good-sized gardens and communal play areas for children. Many of the children from the first generation of owners have now grown up, and Abbotts Hill is seeing a second wave of new residents, as some owners who purchased in 2002 are now downsizing.

Extending to 270sq m (2,906sq ft) over three floors, the property has five large bedrooms, four of which are on the upper floor – with a fifth at lower ground level. The principal is en suite with a good-sized dressingroom. Views from upstairs take in Lambay Island and the Island Golf Club at Donabate.

The property has four reception rooms and is set behind electric gates. The rear garden – which has a southerly aspect – is landscaped, with an abundance of shrubbery allowing year-round colour.

The property will suit househunters in search of a spacious family home just a stone’s throw from one of the prettiest coastal villages in north Co Dublin.