My neighbour’s ugly fence encroaches on my land 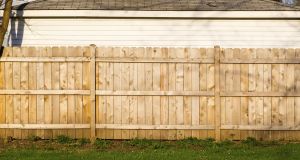 My neighbour informed me verbally the day before he put up a fence along our land. The unattractive side is now facing me, which I am not pleased about. Photograph: Thinkstock

Q My neighbour put up a fence and had the concrete post put on my land. I was only given one day’s notice. He informed me verbally the day before it was put up. The unattractive side is now facing me, which I am not pleased about. Even though I didn’t pay for the fence is there anything I can do here?

A The short answer is that there is little you can do without making things worse. You have not indicated the nature of the site, whether it is a field, or front or rear garden to your residence. It would also be useful to know if there was previously a fence along the boundary and if you are in agreement about the precise location of the legal boundary.

If your neighbour built the fence entirely on his side of the legal boundary you would have no case unless it involved planning issues. If he built it entirely on your side without your permission you would have a strong case for having him remove it. But as only the post(s), which is part of the fence structure, is on your land, it appears that he has built a party fence.

It is possible that he would claim that when he informed you he intended to put up a fence, both you and he understood it to be a party fence, as he would not have to inform you if it was to be entirely on his property. He can claim that you did not raise any objection and so he proceeded.

The lack of clarity about what message was intended to be conveyed by him to you and whether or not he misled you, and also the fact that the fence is now in place, leaves the situation difficult for you to deal with. You could discuss it and make your concerns known to him, but that may further strain your relationship, and the fence would be likely to remain as a reminder of your strained relationship.

Otherwise you have two options: (a) You can try to accept it and mitigate matters by planting shrubs, etc. (b) You can discuss it with your solicitor who is likely to advise you about how easily this can escalate to a serious dispute and of the risk of costly litigation, etc.

Any proposals to erect boundary fences between neighbours should be discussed, clarified and formally agreed between the parties in advance.

Patrick Shine is a member of the Society of Chartered Surveyors Ireland, scsi.ie

Q I live on a busy cut through road. Our windows are quite old so we tend to have a lot of condensation in colder months and they do little to block out noise. We have received four quotes for double glazed windows, with three out of the four saying that the double glazed windows will reduce the noise, and the other saying it would have little impact.

We are concerned about paying for new windows but still being able to hear the heavy traffic noise, which is a real disturbance to us. What should we do? Also are Liniar okay? We’ve heard of Duraflex and Rehau but one of the companies said they use Liniar.

A Double glazing has long been associated with reducing levels of sound. Traffic noise is probably the greatest nuisance in terms of people’s quiet enjoyment of their homes. In your case, it is causing annoyance and clearly there is an issue with significant heat loss, with subsequent condensation. You want to kill two birds with one stone and solve both the condensation and noise issues in one go.

Sound travels through air and air gaps around windows can be an issue. The way your house is built will also have an impact in terms of sound entering your home. It is important therefore to look holistically at your house and to take advice with regard to potential solutions.

The presence of permanent vents to habitable rooms, vents to underfloor voids, where suspended timber floors are used, roofs over bay windows and the like, can all contribute to sound ingress. The provision of new windows therefore may not fully resolve your issue.

Traffic noise generally leads to vibration in buildings. This transmits outside noises to the inside. The only way to reduce this is to introduce a method to reduce or interrupt vibration. The use of solid materials is fine for walls, but at windows, a solution is not as clear cut. Reverberation of glass can transmit sound to the point where noise internally is exactly the same as that experienced on the outside of a building.

If your new double glazing is not designed specifically to deal with a reduction in sound transmission, then sound will penetrate. The outer glass will reverberate and simply transfer the sound from one pane to the other and then, to the inside of the property.

However, with the study of sound waves it has been established that reverberation takes place more easily in similar materials. Therefore, if glass of varying thicknesses are used for the inner and outer panes in double glazed units, sound transmission will be reduced. Depending on the gas used to fill the void between both panes of glass, further sound reduction can be achieved.

The different companies you mentioned are manufacturers of uPVC windows. Without looking at their particular products, it is difficult to advise you as to which would suit best in your particular case. The main variation in terms of the supplier of the window frames is the profile/appearance of the window. In your case, the glazing is of more significance in terms of dealing with the sound transmission issue.

You should obtain a detailed specification from the companies providing you with quotations and have these reviewed by a building surveyor.

Noel Larkin is a chartered building surveyor and member of the Society of Chartered Surveyors Ireland, scsi.ie

Q The rear garden wall will need to be repaired as there is a vertical crack the height of the wall. The crack goes through the bricks in some places and mortar in others. I am worried that the crack is an indication of subsidence. There are no obvious signs of subsidence in my house, but should I expect it? Your advice would be most appreciated.
A Masonry is a brittle material and in over 40 years I have seldom encountered masonry buildings without cracks of one form or another. Usually walls are specifically designed to accommodate the forces at work upon them. Often the major cracks I see are due to shrinkage causing the wall to crack into panels about 6 metres or so across, as this is around the natural length that brittle masonry built without designed movement joints or reinforcement can accommodate. Cracks come in varying forms that provide clues as to how they are created. If the vertical crack you describe changes in width from top to bottom, then you may very well have settlement near that point under the wall and this will also be seen in either a dip or ‘hog’ in the level of the wall.
If the verticality of the wall reveals a tilt to one side with little or no crack evident on the other side, then the crack might be caused by differential expansion as the sun strikes one side.
Often such shrinkage or thermal failure ceases after a short while because the stress in the wall has been relieved by the crack. However, if settlement is the cause movement may continue and ‘tell tales’. Small plastic or glass strips can be fixed across the crack and the scale marked on them and recorded: this will reveal the extent and speed of any ongoing settlement and the appropriate action can then be taken.
Usually garden walls are built to a lower standard on smaller foundations than house walls so – unless there is very evident extensive movement cracking in the garden wall, with considerable sinking of the ground in the vicinity – it is unlikely the stronger foundations of a nearby house will be affected by the vertical crack described.
However, I would strongly advise you to get an experienced chartered building surveyor or structural engineer to inspect the wall and provide a written opinion to alleviate your concerns.
Fergus Merriman is a member of the Society of Chartered Surveyors Ireland scsi.ie