New Homes 2020: A step-by-step guide to financing your new home 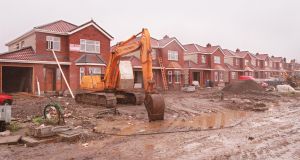 ‘Lenders will want to see your bank statements, for all of your accounts, going back for six months.’ File photograph: The Irish Times

Finding the right home is only half the battle – you’ve got to finance it too. For most of us that means a mortgage. To secure one, do your homework.

The first thing any lender will look at is your income. “You will need proof of income in the form of pay slips, a P60 or a Certificate of Earnings,” says Lorna Gammell of Gammell Financial Services.

You’ll need an up-to-date pay slip plus those dating back over the previous year. Self-employed people need a copy of their Form 11 and Chapter 4 Revenue returns for the previous three years.

Not all income is equal. Permanent and pensionable jobs remain the gold standard for lenders. While three-year contracts in the IT sector fare well enough others in atypical employment will struggle.

Give yourself time to get your bank accounts in order. “Lenders will want to see your bank statements, for all of your accounts, going back for six months,” says Gammell.

They are looking for evidence that you are managing them properly. That means staying within the terms of your overdraft and making sure all your standing-order or direct-debit payments are going through on time.

If you haven’t already done so, save. “Banks like to see a savings history, or a rental history. If you are saving, your money should go into a separate account and show no withdrawals,” says Gammell.

Sort your credit cards. Aim to pay off any outstanding amount every month. Ideally you should have no debts but with car loans and other personal loans “they will look for evidence that you are good at paying them back,” she says.

Under the Central Bank mortgage lending rules the maximum you can borrow is 3½ times your annual income. Lenders can give up to 90 percent mortgages for the first-time buyer.

Exceptions to this, the much vaunted “exemption”, arise because each lender has the discretion to breach these rules for 20 per cent of its mortgage book. A broker can nudge you towards the lender mostly likely to say yes if, for example, it takes bonuses or shift allowances into consideration.

“Banks are allowed to lend outside of standard criteria in certain cases. And each lender issues its own conditions, which change over the course of the year, depending on what funding is available,” says Gammell.

The beginning of the year typically sees an uptick in activity as borrowers seek to gain exemptions before they run out, but that’s not an entirely accurate assessment of how it works.

Where an exemption-approved borrower doesn’t draw down their funds within six months, their exemption is given to another applicant. Because borrowers will often seek approvals from several lenders, a number will go back into the system throughout the year.

Brokers keep close contact with banks and know exactly where each lender is at any point in time and which is in the best position to lend. Only two were reportedly open for exemptions in January for example.

An exemption can net you a higher loan-to-income multiple – up to 4½ times income – or a higher loan-to-value ratio. The biggest barrier to getting a first-time buyer’s mortgage, however, remains the deposit.

“The finance is there, the properties are there, but at the end of the day the typical first-time buyer is out there renting so trying to save is difficult. Where previously people rented for a year and saved, they might now be renting for three years before they can buy,” says Gammell, who points out the need to factor in stamp duty and legal fees also. “So an extra few thousand needs to be saved.”

Getting a gift from the so-called Bank of Mum and Dad is great, but even if you do, “you still have to show you saved a certain amount of the deposit yourself, to show good faith”, says Gammell.

Brokers know too which banks won’t approve you for an exemption until you go sale agreed, which is the case with some, points out Niall Coughlan of MMPI Financial Services. “It’s really down to timing. A bank could be closed to exemptions one week and open the next.”

The trend towards fixed-rate mortgages shows no sign of abating and rates are competitive as a result. Ulster Bank recently introduced a 2.2 per cent five-year fixed-rate for mortgages with an 80 per cent loan to value ratio or less, on a property worth more than €300,000.

“It’s a really super rate,” says Wayne Sheridan of Smart Mortgages, who points out that different banks use different assessment tools. Some will take children’s allowance into consideration as income, for example. “Some take a punitive view of childcare costs where others wouldn’t,” he says.

The other decision to make is whether or not to go for a cash-back deal. A number of lenders, including Bank of Ireland, PTSB and EBS offer cash back deals, typically for about 2 per cent of drawdown. These are popular with first-time buyers because it can go towards the cost of furniture, says Sheridan.

However, if you opt for one, it’s worth going back out into the market with a view to remortgaging, or renegotiating, in five to seven years’ time. “As a caveat, just be very careful that your circumstances haven’t changed significantly in the meantime, such as by going to part-time work, stopping work, or having three kids,” says Sheridan.

Mortgages: By the numbers

There is financial help available to first-time buyers. The help-to-buy incentive provides a refund of income tax paid over the previous four years, to help towards a deposit. It’s open to first-time buyers of new properties, as well as self-builders.

The Rebuilding Ireland Home Loan, available nationwide from local authorities, can be used to purchase a new or second-hand property or for self build and provides up to 90 per cent of the market value of the property with a maximum loan of €288,000.

You can also get rent-a-room relief, on rental income up to a value of €14,000, tax free. According to Ray Palmer Smith of Knight Frank, many buyers of the two-bedroom houses at Taylor Hill in Balbriggan bought with the intention of doing just that.

“The first phase was very attractive to young professionals looking to get on the property ladder and, because each bedroom has its own en suite, the houses were designed to suit that. As well as young couples we had very many single professionals who bought them with a view to renting the other room to a friend,” he says.