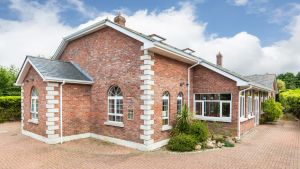 If ever there was a reason to not judge a book by its cover, or indeed a house by its exterior photograph, Calamber at 16 Thormanby Woods in Howth is a prime example.

From each of the entrances, an electric vehicular gate and a pedestrian gate around the corner, the house looks like a modest detached home with little hint of its its 463sq m (4,984sq ft) of internal living space.

The owners bought the property in 2010 for €1.4 million from the late Cranberries singer Dolores O’Riordan, who died in 2018,  and her husband Don Burton.

She and Burton bought Calamber in 2004 for €1.9 million. At the same time they bought a site nearby in Baily for €2 million, with the intention of building a similar sized home, but sold the site in 2008 for €3.2 million, having decided to stay on in Calamber.

From the exterior you would be forgiven for thinking that this is a moderately sized three-bedroom house, rather than a five-bedroom, five-bathroom family home with three reception rooms, in addition to a breakfast room and conservatory.

But it is upstairs, accessed by a sweeping staircase lined with a collection of clocks, from a rather formal hallway, where the real surprise awaits.

At the top of the stairs lies a cosy living space, flanked on either side by two rooms measuring 74sq m (797sq ft) each. One is used as an office and music room and the other as an additional bedroom, storage area and further living space.

To put the magnitude of theses rooms into context, they each occupy the floor space of an average sized city mews.

It is the type of house that will really suit a large family, as the upstairs area could be a superb teenager’s den. The only problem might be getting their friends to leave as it is so private and feels almost detached from the rest of the property.

The house is in excellent order, with lots of high-end fittings such as the Gaggenau and Miele appliances in the kitchen and hardwood flooring throughout.

The five bedrooms on the ground floor include four en suite doubles, and a smaller double that interconnects with the principal suite. This space would make an ideal nursery or large dressing room.

Located on a corner site, though not overly large given the size of the house, the rear garden is laid out with a tiered lawn and three sheds, one of which was a sauna room for O’Riordan and Burton. The wraparound garden, which is completely private, would benefit from further planting and the use of weed killer in places.

The extensive house on a private site is now on the market through Lisney seeking €1.395 million.