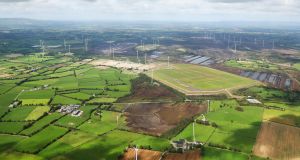 An aerial view of the lands at Lisheen suggests potential for renewable energy and agriculture.

A wide range of investors and land speculators are expected to express their interest in the sale of a major land holding located in Moyne near the border between Tipperary and Kilkenny.

Extending across a total area of 800 acres, the “Lisheen Lands” portfolio comprises a mix of industrial and agricultural lands, and comes with the benefit of a significant income stream through renewable energy and agricultural enterprises. The lands also include a number of outbuildings and residential dwellings. The Lisheen Mine ceased operations in 2015 and the property has since been successfully rehabilitated to a brownfield industrial site.

The entire portfolio is being offered to the market in a single lot by agent Knight Frank at a guide price of €11 million.

The lands are officially designated as the National Bioeconomy Campus where renewable biological resources from land and sea are used to produce food, materials and energy. Additionally, “Modern Demonstrator Region” status has been awarded by the European Commission to the area, making it one of only six regions in the EU to be granted such status. The vendors are also in discussions with other operators to set up facilities within the campus on land that will not form part of the land for sale.

The subject property also includes a wind farm comprising 18 turbines, subject to a long-term lease through which the incoming purchaser will benefit from income stream.

A significant element with the lands are of excellent agricultural quality and would, according to the selling agent, be ideally suited to dairy farming while there is also potential to expand the wind farm or seek alternative renewable energy uses such as solar farms, subject to planning permission.

The asset benefits from being situated in close proximity to the M7 and M8 motorways, making the lands highly accessible to major arterial routes. The towns of Urlingford, Thurles and Templemore are also located close by.

James Meagher and Robert Wilson of Knight Frank say: “There is significant scope to generate additional income through the National Bioeconomy Campus designation of the lands as well as the potential to expand existing renewable energy operations [subject to planning permission].”

Parties seeking further information on the land holding can do so by phoning James Meagher or Robert Wilson at Knight Frank on 01- 634 2466.

1 How do you know if you are wealthy? It’s not straightforward
2 Knock gets visit from world’s largest passenger plane
3 High Court overturns permission for height increase in Johnny Ronan apartments
4 Planning permission refused for major new office block in Galway city centre
5 Fund entitled to injunction for possession of south Dublin property, High Court rules
6 How can I view my dead brother’s will if I’m not the executor?
7 Green Reit recruits Arthur Cox to help get planning for new cinema
8 Galway development could transform skyline with 21-storey tower
9 The gadgets that can make travelling a bit more enjoyable
10 Appeals court sets aside €1.37m judgment entered by Bank of Ireland
Real news has value SUBSCRIBE