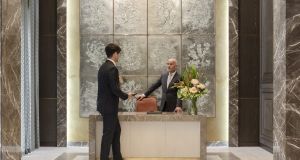 Lansdowne Place in Ballsbridge, Dublin 4, offers a bespoke concierge service for its residents.

It’s hard to believe that nearly 13 years have passed since developer Sean Dunne unveiled his hugely-ambitious plans to bring a piece of Knightsbridge to Ballsbridge with the delivery of hundreds of high-end apartments on the site of the former Jurys and Berkeley Court hotels. With a 37-storey skyscraper, which its architect Ulrik Raysse described as being “cut like a diamond”, proposed as its centrepiece, the €1.5 billion scheme proved to be too much for a property market already hurtling towards the proverbial rocks.

While some might say Dunne was simply unlucky with his timing, there is another school of thought which posited that the Dublin residential market could never support the sale of hundreds of apartments within one scheme at the €1 million plus prices the developer was mooting in 2007.

Fast forward to today and it would seem the question is very much open to debate judging by the sales now being recorded on the property price register for Lansdowne Place, the high-end residential scheme Joe O’Reilly’s Chartered Land is delivering on the lands once occupied by the Berkeley Court Hotel.

An examination of the details of the eight transactions which have appeared on the register to date shows that Chartered Land has secured prices ranging from €704,845 for a one-bedroom apartment to €1.85 million for a three-bedroom apartment at the Templeton, the first building within the scheme. The addition of the 13.5 per cent VAT applied by the Government to the sale of all new homes meanwhile brings those figures to the developer’s asking prices of €800,000 for a one-bed unit and €2.1 million for the highest-priced three-bedroom unit recorded on the public register.

With upwards of 100 apartments having sold at Lansdowne Place since the launch of its first phase in 2017, further details of the sums achieved are expected to appear on the register over the coming months.

Potential buyers holding out for evidence of price reductions will likely be disappointed, according to a source familiar with the sales strategy.