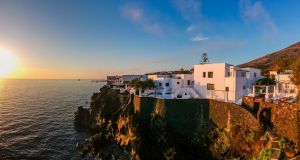 The villa sits on the side of the island 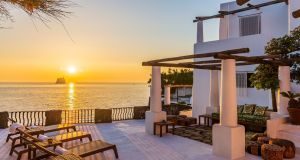 The villa overlooking the Mediterranean 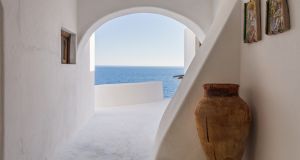 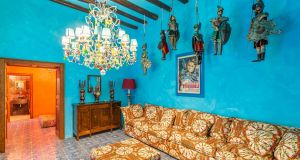 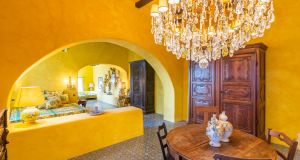 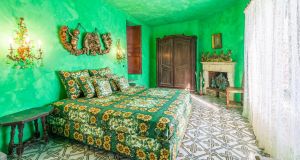 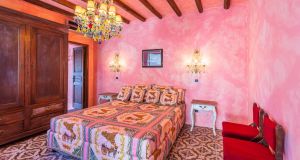 One of the seven bedrooms

A unique sea-front Sicilian villa owned by famed fashion design duo Domenico Dolce and Stefano Gabbana on the island of Stromboli has been placed on the market seeking an estimated €6.5 million.

The seven-bed property at the foot of a volcano in Sicily’s Aeolian archipelago was built in the 1990s when three traditional local buildings were merged on a beautiful coastal site.

The exterior conforms to typical Mediterranean architecture but the interiors reflect the decadent Dolce & Gabbana signature style, and feature seven small suites, each one designed with its own colour scheme and furnishings.

The couple, who split after 20 years in 2005 but remain close friends, living beside each other in Milan, are both Italian born and credit Sicily as a major inspiration for their statement designs.

For more than 20 years they have spent their summers in the region and the villa has hosted countless lavish parties and celebrity stars. They used the home and the surrounding seas to shoot a fragrance ad for their “Intenso” cologne with Colin Farrell in 2015.

The 5,382 sq ft (500 sq m) property enjoys expansive sea views with the volcano Iddu (translated as He) sitting directly behind. All 2,530 sq ft (235 sq m) of the interiors have been carefully designed to reflect the owners’ distinctive and flamboyant tastes. Dolce & Gabbana textiles feature prominently in the cushions, curtains and wall coverings. Delicate local artwork and lace have been used throughout, while colourful hand-painted tin-glazed pottery has been painstakingly applied to walls and floors everywhere.

The island of Stromboli can only be accessed via helicopter or boat, making it the ultimate escape for the super rich. It was made famous by Roberto Rossellini’s 1949 film Stromboli, Land of God, starring Ingrid Bergman as the main character.

The villa’s selling price has not been made available, with luxury property agency Lionard Luxury Real Estate listing the price as “available on application”.

However it’s understood that the property was initially listed online with a figure of €6.5 million attached, though this was quickly taken down. Italian daily La Repubblica reported that the agency said this was not the real price, but a server error. Similar luxury villas on the island typically sell for around €1.2million.

Michael Caines: ‘You’re hanging upside down and you see a hand, lying there, and your arm’s gone’
Real news has value SUBSCRIBE