Rounded finish on leafy square off Leeson St for €1.75m 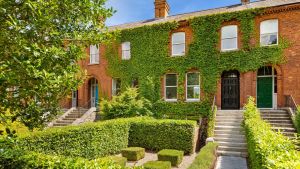 Dartmouth Square is one of Dublin 6’s most beautiful squares and its handsome period redbricks, most of which are two-storey over garden level in style, enjoy access to the gardens at its heart.

Asking prices for these homes have softened slightly since No 63 sold in July 2016 for €1.92million, half a million over its AMV when it went to auction. That three-bed property had 215sq m/2,314sq ft, and a self-contained bedsit at garden level.

Prior to the auction, 13 houses had traded hands on the square since 2010 at an average price of just under €1.3 million each, however most of these required refurbishment.

Now No 45, which can be configured as either a four- or five-bedroom property, measuring 268sq m/2,880sq ft, is being brought to market seeking €1.75 million through agents Savills.

All the heavy refurbishment work here has been done. A big kitchen, dining living room extension is already in situ, leaving the next owner with little to worry about apart from the decor.

Accessed via a set of granite steps and with its front, west-facing garden set out in low-maintenance shrubbery and golden gravel, the property opens into a bright hall.

The property has deep rosewood-stained timber flooring throughout and two interconnecting receptions at hall level. The living room, to the front, has a pair of timber sash windows while there is just one in the dining room to the rear. Fold-back interconnecting doors can close these rooms off from each other but, open, with their matching white marble fireplaces they offer a smart sense of symmetry.

The kitchen, accessed via glass balustraded timber stairs, has a built-in Eggersman kitchen with counters concealed behind a lichen green half wall.

A glass roof overhead dispenses with the need for task lighting – at least during the summer – and there is plenty of room for a sizeable sofa and dining set. A wall of bifold doors concertina back to open the room to the east-facing garden where there is a limestone patio and a conversation pit that gets midday sun. There is pedestrian rear access to Warner’s Lane that leads on to Leeson Street in minutes and is also a place to store bikes.

To the rear of the kitchen is a home-cinema room that can be closed off but probably needs a bit of sound dampening to make the experience immersive. There is also a room to the front that could be a fifth bedroom or den for the kids.

Upstairs on the hall return is the room most likely to become the main bedroom. It is blissfully quiet with a corner window washing it in light and has an adjoining shower room, naturally lit by an opaque glass window, a set-up that is far superior to an ensuite.

There are three more doubles on the first floors, the two to the front boast views across the square. These rooms have the use of the family bathroom at the top of the house on the return. The property has been staged for sale by the Interiors Project.

Has lockdown reduced the number of premature babies? This doctor thinks so
8

Irish family stuck in Cyprus: ‘We hope our flights home are cancelled’
10