Alys Fowler on love and gardening: ‘Ursula Halligan inspired me to come out’ 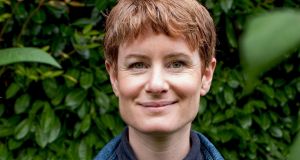 lys Fowler: “Being that tidy-minded is not only an awful lot of hard work, it also comes at an enormous cost to our wellbeing.”

As a longstanding gardening columnist with the Guardian, a bestselling author, and a former presenter on the BBC’s Gardener’s World, Alys Fowler is a familiar name to many. Known for her passion for food growing, she belongs to a younger generation of British gardeners who’ve done much over the last couple of decades to transform the staid and sometimes stuffy world of horticulture into one that embraces modern techniques and fresh ways of growing food and flowers in exciting and unconventional spaces.

“I think gardening is a lot less naff now than it was when I started my training 24 years ago,” she says. “The world is waking up to the fact that our universe as we know it is under threat, that we just can’t go on as we have. Much of that is a growing awareness of the environment, of the need to relax our attitude to tidiness in our gardens and green spaces rather than worrying endlessly about achieving perfection. Because being that tidy-minded is not only an awful lot of hard work, it also comes at an enormous cost to our wellbeing.”

Her own small town garden in Birmingham embodies Fowler’s relaxed, planet-friendly approach as well as her love of all things foodie. A typically long, rectangular urban plot divided lengthways by a meandering central path, it’s filled with all the clutter and joy of a town garden where flowers and food crops grow cheek-by-jowl in a pretty, pollinator-friendly tumble.

Both the garden and Fowler’s allotment feature regularly on her popular Instagram feed. The latter is a digital scrapbook-cum-photo album of a way of life that younger gardeners will find instantly familiar, an endearing stream of unstaged snaps of plants and pets, of kilner jars filled with delicious homemade treats including fermented rhubarb, kimchi and lime blossom cordial, of herbs (a particular love), carefully-tended houseplants (another love), occasional travels to foreign places (ditto) and waterways (yet another, more recent passion).

It was the latter that she explored in one of her most recent books, Hidden Nature: A Voyage of Discovery, which was published in 2017 and shortlisted for the Wainwright Prize. In it she intertwines the story of her travels on an inflatable kayak along Birmingham’s canal network with her moving account of the dawning realisation (then a married woman in her late 30s) that she was gay.

“Funnily enough I was in Ireland – in Hunter’s Hotel in Co Wicklow – when I made the decision to come out. It was a week before the vote on gay marriage, an extraordinary time when everyone in Ireland was having this conversation. I remember reading this amazing piece in The Irish Times by this older woman whom I think was a well-known journalist or a politician – [it was a piece by TV3’s political editor Ursula Halligan]– in which she wrote so movingly about coming out as a gay woman and how she wished she’d done it many, many years earlier.

“I got on the bus back to Dublin Airport realising that everything had to change, that I had to unpack pretty much everything about myself and my life if I was to go forward.”

Several years on, she says that the experience has taught her to be kinder to others as well as to herself. “To recognize the importance of allowing people the right to change their minds, of giving them the space and time to do the best they can. I’m more willing to listen, less willing to judge.”

Now divorced, she and her ex-husband (an artist only ever referred to as H or Holiday by Fowler), remain friendly. Fowler’s relationship with Ireland is similarly cordial. “Somehow, every time I’ve felt like my world is in danger of crashing down around my ears, I’ve fled to Ireland. I love its energy, its intimacy, its friendliness.”

'Herbs are such remarkable plants with such powerful healing properties'

Earlier this year she visited some of this country’s great gardens: Powerscourt, Hunting Brook, Altamont, Mount Usher, Killruddery, Hellen Dillon’s and Mount Congreve. She plans on visiting many more later this summer when she returns to give a talk at Carlow’s Visual Centre (Thursday, August 1st, 7.30pm, see carlowgardenfestival.com, pre-booking essential) as part of the Carlow Garden Festival.

“I’m so impressed by Irish gardens and nurseries. The difference between your climate and ours is small yet it makes such a big difference in terms of what you can grow. This time I’m hiring a car, which will make life a lot easier as well as allowing me to bring home lots of plants.”

While Fowler’s talk at this year’s Carlow Garden Festival will be wide-ranging in its subject matter, it will include plenty of references to herbs, the subject of her newly-published book, A Modern Herbal (Penguin). What is it about this group of plants that so entrances her?

“For anyone with an interest in food-growing, I think that it’s a natural progression. They are such remarkable plants with such powerful healing properties…powerful in ways that I think we can’t truly appreciate until we grow them ourselves. When you grow your own, you have this mutual relationship based on care, respect and reciprocity where you’re imbuing them with a lot of love and energy that you receive back in full when it comes to harvesting and using them.

“You could call it the gift of sharing. I know that sounds terribly hippy but I do believe that relationship is an ancient one integral to our make-up.” The invitation by the Herb Society some years ago to become its president delights and amuses her in equal parts. “Yes, I’m their president, how great is that!”

Is writing an important part of her world? “Absolutely. I will write for the rest of my life. It would feel really odd to let a week go by without it.” A freelancer, she regularly contributes to a wide variety of publications including Gardens Illustrated and The English Garden alongside her weekly column in the Guardian. “It’s given me a great life and one that I know I’m privileged to enjoy.”

Books are also important to her. “I’ve been a voracious reader since childhood.” Favourite authors/ writers include Reginald Farrer, Joy Larkcom, Elliott Coleman, Jane Powers and Patience Gray, the late English-born food and travel writer whose book Honey from a Weed is one of her enduring favourites.

When I tell her that I’ve never heard of Honey from a Weed, Fowler can’t suppress her joy at sharing her discovery. “I love it when I meet people who haven’t yet come across her! She’s such a phenomenal writer, you have to read her.”

She’s too modest to say so, of course, but that’s pretty much what Fowler’s many fans would say about her.

Any empty spaces in the kitchen, garden or allotment recently freed up by freshly harvested crops can be filled with young kale, chard, cabbage, Florence fennel, lettuce and calabrese plants.

Many kinds of early summer-flowering herbaceous perennials will give a second flush of flowers if they’re cut back hard at this time of year and then given a generous watering followed by a liquid seaweed/tomato feed. Examples include delphinium, astrantia, hardy geraniums, alchemilla, stachys, catmint.

Commonly known as the butterfly bush, and happy in full sun or light shade and a free-draining soil, the dense flower spikes of this hardy, deciduous, fast-growing shrub appear from late June to September and are irresistible to butterflies and other pollinating insects.

Many of the better-known varieties such as the violet-purple B. davidii  Black Knight form tall, spreading shrubs, making them suitable only for larger gardens, but new, ultra-compact varieties suitable for container-growing are now available such as Buddleja x alternifolia Unique and the Buddleja Free Petite series. To learn more about Irish butterflies, check out the website (biodiversityireland.ie) of Biodiversity Ireland, which includes a host of very useful resources.