How to ‘rewild’ your garden for the good of the planet 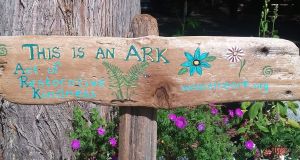 Award-winning garden designer Mary Reynolds suggests putting up signs saying “This is an Ark” to make clear to judgmental neighbours and local council officials that this is an attempt at ecological rejuvenation.

Having realised the damage that gardening does to nature, the acclaimed Gold Medal winner at the Chelsea Flower Show Mary Reynolds now calls herself a “reformed” garden designer. In 2002, she captured the attention of the world with her award-winning wildlife garden, but now she has turned her back on gardening and urges us all to “become guardians rather than gardeners” by instigating one small change in the way we care for the patches of land under our care, whether it be a garden or just a window box.

She wants us to enable them to become “restored, native ecosystems” or sanctuary spaces for nature, by simply leaving them untended, or else helping to reboot the ecosystem by sowing native organic wildflowers, or removing invasive plants, though not with herbicides. Her vision is of a patchwork of unruly stretches of wild plants and creatures that have been “allowed and supported to re-establish in the earth’s intelligent, successional process of natural restoration. Over time, this will become a pantry and a habitat for pollinators and wild creatures, who are in desperate need of support.”

While the idea may seem idyllic, the reality is somewhat messier. She wants us to dig up our lawns and allow the natural process of regeneration to take hold – to welcome the dandelions, docks and nettles that will encroach, and the thicket of thistles and briars that will later replace them. She suggests putting up signs saying “This is an Ark”, with a link to wearetheark.org to help people understand what is happening, and make clear to judgmental neighbours and local council officials that this is an attempt at ecological rejuvenation rather than a display of sloth.

Her website has a stirring map of all the wild patches that have already been set aside, and she reassures us that your garden “will re-establish itself as a simple ecosystem very quickly, and over time it becomes a strong wildlife habitat and eventually a multi-tiered complex community of native plants, creatures and micro-organisms.”

The beauty of this one small change for climate change is that no money is required, nor even any effort, just stop cutting, spraying, strimming and poisoning the soil. Oh, and also to have the courage to withstand the tutting and disapproving glances of one’s neater neighbours, who are still wedded to the idea of submitting nature to their whims.

“It’s entirely effortless,” she says, “yet it could create a powerful web of healed earth.” If we don’t have access to land, Reynolds suggests creating arks on public lands to raise awareness, as “one person can initiate big change, simply by inspiring change all around them. Because if not us, who will do it? If not now, when? If not here, where?”