Purdey shotgun and a whopper diamond: what’s in the latest auction sales 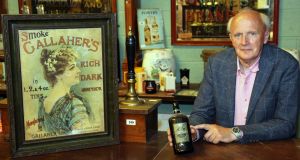 Auctions taking place around the country this week include some rare and unusual items.

At John Weldon’s Fine Jewellery sale at Cow’s Lane in Temple Bar on Tuesday, July 30th, one of the items listed among the 340 lots, along with a vast selection of engagement rings, is an incredible diamond and emerald cluster ring. Unusually, the diamond is the centre stone, and measures a whopping 7 carats, surrounded by emeralds.

“This is one of the largest diamonds to come on to the Irish market this year. The brilliance and fire within the diamond is just amazing,” says Weldon. He also points out that the diamond has been laser treated “which is done to improve the overall clarity of the diamond” but also reflects the asking price, “which is lower than it would be had it not been treated, but only the wearer will know(€20,000-€25,000). Seejwa.ie

At Victor Mee’s, a pub memorabilia and architectural fittings sale in Cloverhill on Tuesday-Wednesday, July 30th-31st includes the contents of the Clermont Arms public house in Co Louth. Mee describes it as “a once in a lifetime collection. Having such a large number of advertising pieces within one collection is uncommon, making this assortment very unique and possibly one of the rarest collections I’ve seen in many years.”

Included in the sale of over 1,000 lots, besides some rare whiskies, are a collection of Mick McQuaid tobacco show cards (€200-€400 each), an extremely rare Castlereagh Irish Whisky WH Taggart Limited Belfast advertising mirror in its original frame (€3,000-€6,000), and a rare James McKendry Ballymena Importers of The Finest Wines Brandy and Gin advertising mirror by Campbell Brothers Belfast in its original oak frame (€1,200-€1,800). See victormeeauctions.ie

Damien Matthews and Stephen Ryan’s Interesting Antiques and Interiors sale on Monday-Tuesday, July 29th-30th at the Temperance Hall in Kinsale of over 900 lots from the clearances of country homes will feature an 18th-century shell-carved Irish side table in red walnut (€5,000-€8,000). “It is a rare piece, and is of a nice domestic size, which came from the family home of Lord Greville.” according to Damien Matthews.

In 1858, Mullingar was sold to the Greville family, and 10 years later Lord Greville granted the lease of a right of way beside the Army Barracks to the British War Office for an incredible ten million years, making it the longest lease in history. See ryansauctioneers.com

The forthcoming Dolan’s Art sale in Ballyconneely on Saturday, August 3rd and Monday, August 5th will include a rare Purdey shotgun, which was originally manufactured in 1865 for the Duke of Cleveland in Northumbria. Purdey guns are considered to be one of the most collectable of all shotguns, and have been the sporting weapons of choice by monarchs for the past two centuries.

This piece, serial number 6918, which has an estimate of €3,000-€3,500 was made using the patented Thumb Lever, and was originally a pin fire gun, but later converted to centre fire to accommodate modern cartridges. The shotgun is being sold on behalf of Dr John Casey, the local Clifden doctor and keen hunting enthusiast, as part of lots from his house The Old Rectory in Clifden. See dolansart.com