Cottage draws builders, friends joining forces, a Parisian and a musician with savings 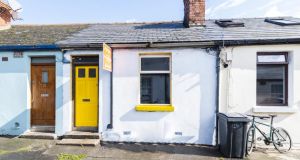 At the final viewing of a broken-down, single-storey cottage in a cul-de-sac off Rutland Street, just north of the River Liffey in Dublin, more than 20 interested parties cross the threshold. Asking €85,000, 24 Rutland Cottages has attracted huge interest since the 31sq m property came to public attention as the cheapest house for sale in Dublin.

Scores of people have attended the four viewings of this tiny terrace, including first-time buyers, parents with growing families, mammies looking on behalf of adult children overseas, and builders and small-time developers.

Bidding has already crept up to €105,000, and, keen to wrap up the deal, the house’s selling agent, Ronan Crinion of MoveHome, says he’s asking bidders to make their best and final offer by noon on Monday.

One viewer regales the room with the story of a fella he knew who bought a hotel in Cavan and discovered a fireplace hidden behind a wall that he later sold for €500,000

“It’s one dear room,” says one viewer, only half-joking, who doesn’t want to give his name. He estimates that it “will cost minimum €100,000 to do it right” for anyone who is not in the building game. “But when you start stripping it out you don’t know what you might find.”

He’s standing in front of the fireplace as if he already owns it and, holding court, regales the room with the story of a fella he knew who bought a hotel in Cavan and, when he started renovating it, discovered a fireplace hidden behind a wall that he later sold for €500,000 – way more than he paid for the hotel.

Although it’s unlikely any such treasures are hidden here, the mood is pretty convivial. You can spot speculative developers a mile off. In work clothes and steel-capped shoes, measuring tapes in hands, they miss nothing. Mick Gannon, a building contractor, had already talked to an architect before this viewing. He’s keen to add to a property portfolio that includes several pre-63 buildings in the north city. His sister now wants to get involved in the business, and he is looking at this doer-upper for her.

He thinks he could dig down to create extra headroom and add a second, dormer floor, although a window on the gable wall of the neighbouring property might be problematic.

There’s also plenty of interest from first-time buyers, who are inspecting the property in twos and threes.

Two men, Laxman Das and Surendra Bobhate, who are both originally from India – Das is now an Irish citizen – are looking at it as a way to get on to the property ladder. “It is very hard to live in Ireland, ” says Das, who lives in a one-bed apartment with his wife and two children. He has been here for more than 20 years; Bobhate is here on a work visa. They plan to join forces to buy the house, do it up, let it out and then save the rental income.

They both have savings. Das has done this “by not going to the pub, not going on holidays, just saving, saving. My salary is not high enough to get a mortgage.” He thinks a refurbishment would cost €50,000.

I’ve got savings. Last time a recession hit I didn’t have the money and missed out on opportunities to buy. So now I have it ready. I could buy it outright

Molly O’Brien, an Irish American, is looking on behalf of her parents, who emigrated to the United States years ago and are living in San Francisco. Her dad is a contractor, so she thinks the works wouldn’t faze him. She’s renting a room in Portobello, across the Liffey, and hopes she could live in the house when it’s done. “I could keep it for them and move in with friends when they’re in town.”

Laura Duez is a Parisian viewing with two friends. She has savings. “I’ve been saving for 20 years,” she says, but she isn’t at all sure how much the cottage would cost to renovate. Currently living in Crumlin, she likes the central location.

Martyn, a musician, arrives late, just as most people have drifted away. What would he do? “I’d start by fixing it as is and do a lot of the work myself.” He also has a lot of builder friends who could help. Is he worried about getting additional funding from a bank to do the works? “I’ve got savings,” he says. “Last time a recession hit I didn’t have the money and missed out on opportunities to buy. So now I have it ready. I could buy it outright.”