Chaos descends as we prepare our old home for tenants 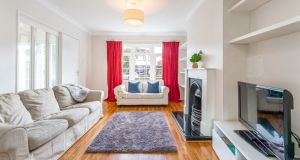 Someone had drawn a T-Rex on the livingroom wall

‘Please don’t do so many jobs that we can’t have any fun.” So said my little girl as our house move kicked into gear. The decision to relocate from a west Dublin suburb to a seaside village was a spur of the moment one, though it had been years in the hatching, and it was fair to say that fun had slipped down our list of priorities.

Having secured pretty much the only family-friendly rental available in our new location, we signed the lease almost immediately. This meant we could now apply for a school place for our eldest for September, but with the June mortgage payment, we were also hit with a month’s rent (plus the deposit). We couldn’t afford another month of paying on the double, so the pressure was on to let the house.

We only had three weeks, but we had seen for ourselves the extreme shortage of rental homes. This was doable. Okay, so it wasn’t ideal that my husband had to work round the clock at the time while I had to pack up and transport all our worldly possessions. And get 47 items in the house replaced or repaired.

Mercifully, the next viewing went well and we secured tenants, again. Teachers. Great – sensible, reliable. A few days later, they found another house

Really? True, someone had drawn a T-Rex on the livingroom wall. And yes, there were still traces of Tan-Gate upstairs, when a few years ago I had popped our eight-month-old into his cot so I could get dressed and his sister kindly gave him my make-up bag to play with. Ah, the memories.

So maybe the house could use a lick of paint. But there wasn’t the time or the money to get someone in. Fine, I said, I’ll do it myself. At first, it was actually quite satisfying. And the children embraced my can-do attitude, getting their own snacks (by grinding salt cellars into their mouths), cutting themselves fringes, and zip lining along the clothesline with coat hangers.

But soon there was paint in everyone’s hair, on the soles of shoes, on uniforms. And then a foot collided with a paint tin and it emptied its contents onto the laminate flooring that swells if liquid is left sitting on it. Things were falling apart, and I hadn’t even finished one room.

My mother arrived on the doorstep the next day and announced she was staying until the job was done. Thank God. Before I knew it, she had the landing and bedrooms finished, and I also noticed that the skip in the driveway had been completely emptied and repacked like a perfect Rubik’s Cube. Finally, the job was complete, the photos taken and the ad posted online. There was great interest, and a viewing evening was arranged.

Meanwhile, the house descended into chaos, stuffed with boxes of belongings, two excited children, and hordes of workmen deactivating the broken back boiler, fixing holes in floors, removing the old oil tank, upgrading the electrics, replacing the bathroom fan, re-grouting tiles. The windows had been cleaned but were already covered in sticky handprints again; the electricians had let the blind man in, but he had fitted the wrong blind on the wrong window.

Somehow, we wrestled the house into a presentable state for the viewing, and a call came through the next day: “Congratulations. You’ve got tenants.” Huzzah! A family with two teenagers and two requests – could we get rid of the construction wallpaper in my little boy’s room, and could we move the beds out? I managed to get someone to paint the wallpaper at a day’s notice, and a man in a van was on his way for the beds when news came through that the tenants had found another house. The prospect of another viewing loomed.

“Just move,” a wise family member advised. “You’re going to drive yourself crazy.” But school was still on. Mercifully, the next viewing went well and we secured tenants, again. Teachers. Great – sensible, reliable. A few days later, they found another house.

Despairing, I asked the agents to cut the rent on our ad by €150 a month and bundled myself, the kids and the last of our belongings into the car, and drove to the sea.

Finally we had made our move, but still each day I had to lift our sleeping children out of bed at crazy o’clock to hit the manic M50 and get them to school on time. One day my daughter woke up and asked, exhausted: “Is it a school day?” “Yes,” I said. “But we’re not going.” And, though I shouldn’t admit it, we bunked off for the last few days of term and went to the beach instead. We still had no tenants, and no confirmation of a school place for September, but the little people finally deserved some fun.

Then one day we came back to our new house to find an important-looking envelope waiting – our daughter had officially been offered a place in the school my husband had attended as a child.

And finally word came through – a lovely family was interested in our house, which had been sitting empty for weeks. This time, they actually moved in.