Make a move to Walkinstown, where estate living hits the right note 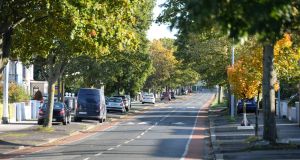 Is it fair to call Walkinstown a well-kept secret? The reputations of nearby Crumlin, Drimnagh, Clondalkin and Terenure are probably better known, but Walkinstown has a lot to offer.

Originally, the Dublin 12 suburb was a dairy farm, until an estate of post-war starter homes was built there. Social housing arrived on stream in the mid-1950s. This means, of course, that several tranquil estates run from the main roads, with green open spaces nearby (previous residents include Olympian Eamonn Coghlan and actor Gabriel Byrne).

The most sought-after addresses include the area’s “musical” roads, located between Walkinstown and Cromwellsfort Roads and named after Irish singers or composers, such as John McCormack Avenue and Thomas Moore Road. Similarly, there’s a cluster of “Saint” roads.

Walkinstown has two main hubs – one at the intersection of the Drimnagh, Walkinstown and Long Mile roads, while the other is at the Walkinstown roundabout. It bears the hallmarks of a settled neighbourhood: it has an impressive six local pubs (Halfway House, the Long Mile Inn, The Black Forge, The Eleanora, the Cherrytree and the Kestrel House), three football pitches, a post office, library and two GAA pitches.

The area is served well by Lidl, Aldi (on the Long Mile Road), SuperValu and Dunnes, while pharmacies, newsagents and fast-food outlets – among them Eddie Rocket’s and Subway – are plentiful. Best of all, it’s more affordable than several nearby neighbourhoods.

Walkinstown Roundabout is one of the busiest (read: reviled) in the city, which brings its own commuting headaches. Long Mile Road and Ballymount, which are within Walkinstown’s borders, are also packed with not-especially-homely industrial and commercial spaces.

Eighty-two per cent of properties in Walkinstown are houses, with most of them built in the mid-20th century.

Number 39 Moeran Road is a three-bed house with a garage on a mature road within reach of everything in the local area (€349,950, via David Ross Estate Agents).

First-time buyers might find plenty to like about the price tag of 139 Walkinstown Drive, a two-bed terrace house with a long garden that’s ripe for potential (€260,000, via City Homes).

At €385,000, 73 Cromwellsfort Road (via Tom Maher & Co. Ltd) provides an opportunity to snap up a 4-bed end of terrace home with a sizeable attic conversion.

A little further up the price ladder lies 73 Beechfield Road, a four-bed, two-bath end of terrace in turnkey condition with the added benefit of a substantial back garden (€475,000, via Lisney).

There have been some reasonably priced sightings in the area, though as a largely settled neighbourhood, the rental opportunities are few and far between. Well-appointed four-bedroom houses on Beechfield Road, Esposito Road and Cromwellsford Road were all on the market at €2,500 a month recently.

The Green Kitchen at 12 Walkinstown Green is a fantastic social enterprise spot made up of three cafes and a garden centre and serves nutritious, home-cooked fare. The Farmhouse Cafe And Bakery (Long Mile Road) stands proud in Walkinstown and is a must-do for lunch. Kin, a Thai restaurant (4 Walkinstown Mall) is a very welcome addition. With six pubs in the area, you’ll not go thirsty – try the nicely relaxed Eleanora’s on the Drimnagh Road and the charming Halfway House (Walkinstown Road) for starters.

“We bought here six years ago and we’re really happy with the area. We’re from what are known as the Musical Roads area and it’s really lovely and settled. It has a very active residents’ association and there’s a lovely spirit here, even though it’s so big. I like that it’s close to the city and the M50 – many of our neighbours would have been elderly, but a lot more families have decided to move into the area – Lisa O’Connor, designer.

Do you live in North Strand? If so, we’d love to hear from you about what it’s like to live there. Please email homeanddesign@irishtimes.com

What happens if a tenant can’t pay rent during the Covid-19 crisis?

Still got chickpeas to use up? Try this crowdpleaser
Real news has value SUBSCRIBE