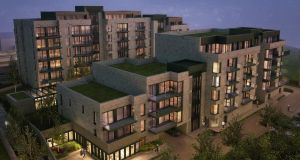 Having remained largely unbothered through the Celtic Tiger boom, the houses lining the N11 in south Co Dublin between Foxrock church and the White’s Cross junction with Leopardstown Road look to be fixed in developers’ crosshairs.

With apartments at Westminster Wood, the high-end scheme delivered by Francis Rhatigan’s Winterbrook on the site of the former Springfield House, having largely sold out within weeks of their launch earlier this year, builders have been combing the area for similarly lucrative redevelopment opportunities.

Only last week the Abbey subsidiary Kingscroft Developments welcomed An Bord Pleanála’s approval of its plan to build 28 apartments on a 1.18 acre site occupied by two nearby derelict houses, Funchal and Garryknock. In securing permission for the scheme, Kingscroft brought to a conclusion a 15-year effort by a succession of former owners of the site to redevelop it.

But that section of Stillorgan Road, as this part of the N11 is more commonly known, is in line for a far more dramatic change over the coming months, judging by the plan that the Granville Hall Partnership, a subsidiary of Richmond Homes, has for the 1.77ac site occupied previously by Roselawn and Aberdour.

In a first for the stretch of road leading south from White’s Cross, the developer has just secured fast-track permission from An Bord Pleanála for the construction of 142 build-to-rent apartments.

The Roselawn scheme will comprise 73 one-bed units, 68 two-bed units and one three-bed apartment distributed across two blocks of five and seven storeys. The development is also set to include what the developer describes as “social integration space” in a standalone single-storey garden pavilion block, a gymnasium, alongside a multifunctional area and work lounge.

Although Roselawn will provide 91 parking spaces for residents, it will also offer pay-as-you-go driving from five shared GoCar vehicles, which will be based at the address.

Richmond Homes, itself a subsidiary of Avestus Capital Partners, looks to be on course for a significant return on its original investment once the Roselawn scheme is up and running. The developer acquired the Foxrock site last year for a relatively meagre €2 million.