Is there a link between decent neighbours and good mental health? I'd well believe it

Tanya Sweeney on the art of being a good neighbour 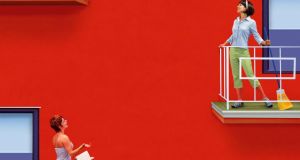 Does anyone borrow a cup of sugar or washing powder from a neighbour anymore? At the risk of sounding all “it was green fields round here once”, things were pretty… well, fluid, when I was a youngster growing up on a west Dublin estate. As kids, we’d wander into every back garden we could and houses with nary an afterthought (my mother once told me that as a toddler, I went missing for hours, only to be found sleeping behind the next door neighbour’s sofa). I regularly sat at other families’ tables for dinner and we slept at each other’s houses, even on school nights. I marched into the child-free house next door for confabs more times than I care to remember. In one curious instance, I slept over in a friend’s house while she slept in mine. It wasn’t even a matter of impropriety; I suppose it was just how it was done back then. There were fences and doors and garden gates, but not really. No one had the money to go anywhere, so much of the socialising was done largely on the road we lived on. Playdates were a thing of the future. If there was another small mouth to feed at the dinner table, big whoop.

Yet for much of my adult life, the idea of knocking on a neighbour’s door has given me considerable pause. Until recently, I lived in an apartment block where people – young, professional, lots of honeyed blonde highlights – didn’t so much as acknowledge each other in common areas. We were our own self-contained unit, completely oblivious to the identities of each other. It could be a generational thing: young people in apartments don’t strictly see themselves living there in the long term, and don’t feel the need to create a sense of community. In any case, there were boundaries. Maybe we liked it that way, maybe we didn’t. In any case, an Irish survey found that only 57 per cent of Irish people interact with their neighbours on a regular basis. And social isolation means something different when you’re 30 than when you’re 80.

Keeping an eye out

Then I moved into another neighbourhood, a warren of old Victorian houses. By the time the removal van had emptied, I knew the neighbours on both sides, and another neighbour a couple of doors down who came out for a looksee. “It’s a really lovely road like that,” observed one. “We all keep an eye out for each other.” I picked up on the subtext immediately: it’s not necessarily the done thing to keep to yourself, and to do so would upset the delicate balance of the neighbourhood. Sure enough, we take in parcels and flower deliveries (not mine, alas) if someone isn’t at home.

We bump into each other in the supermarket or pub. I got a coal merchant recommendation from someone living on the street; borrowed a screwdriver from another. Proving that life can throw surprises your way at any time, I found myself shoehorning a neighbour’s Zimmer frame into a car boot in my pyjamas. I love that my elderly neighbour felt comfortable enough to ask for a favour. By contrast, I went back to the old apartment to pick up mail recently, and the old neighbours wouldn’t even deign to open the gate.

What’s surprising is how nice it all feels. Friends and family have your back, but there’s something nice about another support network, however small.

A good Irish neighbour is a many splendoured thing. They’ll give your garden a nice little spray when they’re doing theirs (and heaven forfend if you only cut your own half of the grass on the footpath). They’ll keep an eye on your car when you’re on holiday. In some places, they’ve made curtain twitching into a glorious art form (I did hear a neighbour speculate benignly, when my curtains were closed at 11am, “she must be having a lie-in there”).

What makes a good neighbour? In a world where we say, feel and see too much online on social media, we are curiously protective of our real-life privacy. Everyone wants to enjoy a peaceful, pleasant neighbourhood. This can mean being mindful over parking spaces and not being that hellish noisy neighbour.

I’m sad to say I was exactly this once, albeit inadvertently. I was living in Australia and, on a drunken whim, my housemate decided to assemble an Ikea bed with a drill. New to the house, I was keen to lend a hand. I couldn’t figure out why the neighbour rang us, deranged with anger, until I realised that it was (a) 3am and (b) walls in Melbourne houses are very thin (I’m wilting with shame now, if that’s any help). While not knowing your neighbours is one thing, being on bad terms with them is a whole new level of unease.

It may seem like a hugely awkward thing to introduce yourself to a stranger. Ringing the doorbell to new neighbours felt massively intrusive at first, but people love showing off their child, or their screwdriver, or their knowledge of the wider neighbourhood. A simple question – “where’s the nearest pub?” or “what day do the bin men come?” – is a pretty good icebreaker.

A Canadian study has found a link between having good neighbours and good mental health, and I’d well believe it. I enjoy this newfound sense of community. It feels safe and inclusive. It feels that I’m marginally less likely to get eaten, per the old spinster cliché, by the next-door neighbour’s Alsatians. They say the past is a foreign country you can’t visit, but thanks to this new community, the west Dublin estate I grew up in feels that bit closer now. Just remind me to check the back of the sofa from time to time.

Can receivers clean up and sell the unsightly house next door?