From a record Leonardo Da Vinci to an unsold Francis Bacon, 2017 had some memorable moments 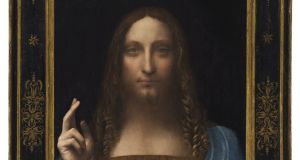 Salvator Mundi, by Leonardo da Vinci, became the most expensive painting ever sold at auction when it made $450 million at Christie’s, New York in November.

King of the World

Gloria in excelsis Deo! Salvator Mundi, a newly-discovered painting of Jesus Christ as ‘Saviour of the World’, by Leonardo da Vinci, became the most expensive painting ever sold at auction when it made $450 million at Christie’s, New York in November – thus restoring the ‘Old Master’ category to its rightful place at the top of the art market. The vendor was Dmitry Rybolovlev, a Russian billionaire oligarch, but the buyer’s name – despite rumours about the involvement of Saudi Arabian princes – was not revealed. However, Christie’s subsequently confirmed the Department of Culture and Tourism in Abu Dhabi is “acquiring” the painting.

Ownership aside, the painting will, at least, be accessible to the public – albeit involving a trip to the United Arab Emirates where it will go on display in the new ‘Louvre Abu Dhabi’ museum alongside major artworks loaned by the French government.

Leonardo certainly showed some of the relative ‘newbies’ who’s boss, although modern and contemporary art continued to attract startling prices at auction. Among the 2017 highlights are: an untitled painting, dated 1982, and depicting a skull, by Jean-Michel Basquiat made $110.5 million at Sotheby’s, New York, in May and became the most expensive American artwork ever sold at auction; Laboureur dans un champ by Vincent van Gogh made $81.3 million at Christie’s, New York, in November; and, in the same sale, Andy Warhol’s 1963 Sixty Last Suppers (essentially a 60-image rip-off of da Vinci’s sublime mural The Last Supper made $60.3 million.

Four-hundred-and-fifty was also the key number in the domestic art market – but thousand, not million. The highest price paid for art at auction was €450,000 and two paintings shared the spoils: the first was Blue Still Life, by the Scottish-born artist William Scott, at Whyte’s in Dublin in May (with an estimate of €400,000-€600,000); the second, By Merrion Strand, by Jack B Yeats, (with an estimate of €300,000-€500,000) at Adam’s in Dublin in November.

Sheppard’s Irish Auction House in Durrow, Co Laois, broke its own record for the highest price ever achieved for a piece of decorative art – or any antique – at auction in Ireland when, in June, an 18th-century Chinese blue-and-white ‘Qing Period’ vase sold for €740,000 – 740 times its median pre-sale estimate (€800-€1,200).

In October, at Sotheby’s, Hong Kong, a new world-record price for Chinese ceramics was achieved when a 900-year old brush washer (a shallow dish used to wash paint brushes ) – a rare example of ‘Ru guanyao’ pottery commissioned by the imperial court during the late Northern Song Dynasty – sold to an anonymous bidder for 294.3 million Hong Kong dollars (about €32 million) after a 20-minute bidding battle.

Back in Dublin, a small cast bronze figure of the goddess Guanyin, with a top estimate of €300 at Whyte’s auction in May, sold for €9,000 after attracting interest from Chinese bidders.

Sale of WB Yeats’ heirlooms made quite a spectacle

The adult grandchildren of Ireland’s Nobel-prize winning poet WB Yeats sold a family collection of art, antiques and collectibles in a series of auctions. At Sotheby’s in London in September, an 18th-century oak and mahogany writing desk used by the poet sold for £187,500 (€214,000) – more than six times the top estimate, while his chair made £32,500. Two months later, at Fonsie Mealy Auctioneers in Co Kilkenny, a pair of WB Yeats’s signature ‘pince-nez’ (pinch-nose glasses) sold for €10,000 – more than 16 times the top estimate of €600, despite having some “minor scratches”.

The Irish in London

Yeats aside, Sotheby’s in London auctioned many Irish lots including, in May, art and antiques owned by the late Northern Ireland businessman Edward Haughey, also known as Lord Ballyedmond, that sold for £14.5 million; in June, rare books from the Jesuit Library at Milltown Park, Dublin, made £2.7 million; and, in September, the annual Irish Art Sale achieved overall sales of £1.9 million, with the top price achieved for The Summit of the Jungfrau, by Sir John Lavery, which made £212,500.

At Bonhams, in March, the auctioneers had what they described as a “pleasant surprise” when the “rarely-seen” 18th-century Irish artist, Daniel Quigley’s Portrait of the Godolphin Arabian made £100,000 – five times the top estimate – during the auction of the contents of Glyn Cywarch, the Welsh home of the aristocrat, Lord Harlech; in June, a 1916 Rising ‘Order of Surrender’, signed by Patrick Pearse, made £263,000; and, in the same month, its top Irish art lot of 2017 was Paul Henry’s Ferriter’s Cove, Kerry that made £197,000.

At Christie’s, in December, an 18th-century painting of Carton House (once home to the Dukes of Leinster, now a luxury hotel) by the Dutch artist William van der Hagen, dating from circa 1730 and entitled An extensive view of Carton House, County Kildare, with Maynooth in the distance, sold for £428,750 – way above the top estimate of £300,000 and a new world-record price for the artist at auction.

But some lots flopped. Among them: letters written by WB Yeats to his first lover, the English writer Olivia Shakespear, valued at up to £350,000, failed to sell at Sotheby’s, London in September; a Francis Bacon painting Study of Red Pope 1962 [Second version 1971 ]with a top estimate of a staggering £80 million – the highest ever for a painting at auction in Europe – failed to sell at Christie’s, London in October; and in November, at Sheppard’s, portraits of former president of Ireland Mary Robinson and her husband Nick by the late artist Derek Hill – being sold by the couple themselves – and each estimated at €3,000-€5,000, failed to sell. And there was only scant consolation for the Robinsons when their pair of ceramic ‘escargotières’ – specially-designed dishes for eating snails, the delicacy known as ‘escargots’ in French – sold for €70, below the low estimate of €100.

River Landscape with a Waterfall and Three Figures, by George Barret Snr, €200,000 (Adam’s)