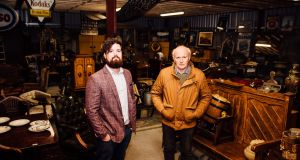 While the art and antiques market is dominated by the major auction houses, small, family-run businesses continue to flourish throughout Ireland.

A notable example is Co Cavan-based Victor Mee Auctions Ltd which is owned and operated by two generations of the Mee family. It is one of the smaller firms harnessing new technology, investing in its online facilities and expanding its saleroom premises.

The company was founded by Victor Mee who opened his first antiques shop at the age of 18 and switched to auctioneering in 2003. After 40 years in the business he’s attuned to changing trends and said “the overall age of our clients is dropping drastically as young homeowners and self-builders seek unique decorative items. These shoppers are also favouring different time periods for décor, with a recent uplift in mid-century modern and industrial-inspired pieces, surpassing the previous preference for Edwardian and Victorian pieces”.

Mr Mee has also seen a spike in demand for vintage pub signage and advertising memorabilia “as Irish pubs grow in popularity around the world” and has a growing list of international clients looking to “furnish their establishments with unique pieces”.

Bryan Mee, who will take over when his father retires, is responding to “the drop in the average age of bidders” by using social media and developing the company’s website (victormeeauctions.ie).

In a further sign of renewed confidence, Blackrock Rare Books in south Co Dublin, one of the newest entrants in the notoriously competitive Irish market for rare and collectible books, has just published its first catalogue “after three years of talking about it”.

The business was established (originally as Broadford Books) in 2013 by Dubliners Tim and Tanya Collie who then took over running the bookshop in the Blackrock Market, one of Dublin’s longest established secondhand bookshops.

Last year they bought the stock of C & P Hyland Books in Co Cork. They are continuing to run the bookshop at 191a Main Street, Blackrock at weekends which has a range of more affordable books and also sell at book fairs but collectors are more likely to be interested in their website.

The debut catalogue features some 200 items in all price ranges including and a scarce copy of An Máirnéalach Dubh – a first edition copy, published in Dublin in 1933, of the Irish language translation by Seosamh Mac Grianna of Joseph Conrad’s ‘Niger of the Narcissus’ (€50); a first-edition copy of John Banville’s 1981 novel, Kepler (€2000); a copy of The Riverbank Field by Seamus Heaney, published by Gallery Press, Loughcrew, 2007 – one of 500 copies signed by the author (€350); and, an 18th century book with a fascinating title: The Universal Directory for Taking Alive and Destroying Rats and all other kinds of Four-Footed and Winged Vermin’ by Robert Smith – clearly a big seller back in the day as this is a third edition copy published in 1786 (€150). See blackrockrarebooks.com.