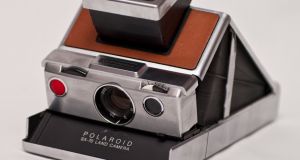 How many photos did you take over Christmas – images that will mostly be trapped in your smartphone pretty much ignored until you run out of space and have to delete, or the technology moves on and you can no longer access them? Don’t think that can happen? Remember floppy discs?

In 1948, when Edwin Land created the first commercially available instant camera, it was a significant moment in design. Land, a Harvard dropout, filed his first patent application in 1929 – polarisers to reduce headlight glare. Through his company Land-Wheelwright – which he established with his old physics professor – during the 1930s he continued to explore the application of his invention on various lenses including sunglasses. Then in 1943 his three-year-old daughter asked why she couldn’t see the photo they’d just taken – and Land had the idea for the Polaroid camera. His design was an instant hit – less than 10 years later the one millionth Polaroid Land camera, model 95A, came off the production line. It probably seems corny now that instant images are so expected, but back in the day – even as recently as the late 20th century – there was something mesmerising about watching the image you’d just taken emerge on that distinctive shaped Polaroid paper. Polaroid continued to evolve (it still does) with a camera producing instant colour snaps coming on stream in 1963.