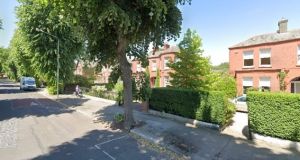 Ireland’s most expensive street based on property values has been identified in a new report published on Sunday.

The Daft.ie report says Temple Gardens, in the Dublin 6 suburb of Rathmines, three properties traded for more than €2 million, with an average price tag of €3.1 million.

It was previously described by Irish Times Property Editor Madeleine Lyons as “a quiet road of just 26 houses tucked away between the broad sweep of Palmerston Road and quieter Merton Road running along the Luas track to Cowper”. She noted that “for a short stretch of detached and semi-detached homes, it certainly punches above its weight when it comes to sales.”

On the other end of the scale there are now only two areas in the country where average property values remain below €100,000. They are Bundoran, Co Donegal where the average is- €91,000 and Castlereagh, Co Roscommon which saw average house prices of €96,000 in 2020.

The value of all residential property in Ireland now stands at over €536 billion, up from €518 billion a year ago, representing a daily increase of €50 million, according to the report.

There were 638 transactions of €1 million or higher for individual properties in 2020 so far.

The highest concentration of property millionaires is in Dalkey with 643, followed by Ranelagh (305) and Ballsbridge (235).

Ronan Lyons, economist at Trinity College Dublin and author of the Daft.ie Wealth Report, said: “Overall housing wealth in Ireland is up about 3.5 per cent on a year ago.

“That increase of almost €50 million per day was driven not by the completion of €6 billion of new homes, which was affected by the pandemic, but instead by higher values of existing homes. If you had surveyed 100 economists at the start of the year, when there was only the first inklings of the potential impact of Covid-19, I doubt whether any – in all honesty – would have predicted that such an economic shock would have caused property prices to rise, not fall, but yet that is what happened.”