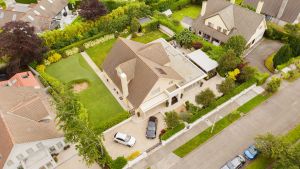 The houses in Ardilea, when built in the late 1960s and early 1970s, were considered to be the finest new address in Dublin 14.

A little bit of Wisteria Lane meets Stepford Wives, it is a quiet enclave of spacious A-Line houses tucked into private sylvan settings and named after prestigious universities.

The builder, Dermot O’Callaghan, had returned from the former Rhodesia, now Zimbabwe, and this apparently is the reason for the vast amount of light in all the houses.

While Leylandii can be a great screening hedge, their growth of almost a metre in height per year means the evergreens if unchecked can soar to 15m in as many years, so it was something the owner had to immediately address.

One of the real benefits of the site is the fact that it is a double plot – with only a handful of houses in Ardilea extending to 0.4 of an acre. When the house was initially constructed it was placed in the centre of the plot, which gives the property garden on all four sides.  There is precedence in the area for additional properties being constructed on these large sites, so there could well be potential down the line to build an additional property – subject to planning.

The owner engaged architect Neville Verdon of SBLM to redesign the entire property which took the new build to 355sq m (3,821sq ft), with much emphasis placed on glazing and light.

“People thought we were mad with all the work that was required and some friends asked, ‘why did you buy a house and just keep the roof?’ But the area is great. You can walk to Mount Anville School, Blackrock College is only 10 minutes by car, and UCD is practically on the doorstep. Even though it is close to lots of amenities, it is a really peaceful place as the only people who drive through are residents,” the owner says.

After living in Dubai for many years, the owner developed a love for marble, and this is evident through the entire property. Alicante marble is used throughout – with handmade inserts in the hallway to create interest.

Marble features in all the bathrooms, along with custom-made mirrors with fog-free glass. The kitchen marble countertop has double bullnose edging which eliminates sharp edges – a feature that families with small children will appreciate.

More evidence of influence from the Middle East, besides the large furniture pieces, are the huge curtains in the living area. “I had seen electrically controlled curtains in the Burj Al Arab (the luxury hotel in Dubai) and thought they would be super in the room as there is so much fabric in them.”

They were custom made in the Middle East and shipped back, where they are now operated electronically.

The house has a Control 4 Smart Home operating system whereby all the light, sound and audio can be operated via remote control, including all the outdoor lighting allowing the well-designed garden to be lit up at night.

The garden itself deserves a special mention. In addition to its size, it features a putting green and bunker that run the entire length of the property.

Surrounded with olive, fig, pear and apple trees in addition to a Zen chill-out space, there is quite a remarkable outdoor kitchen that will appeal to those who love to entertain in summertime.

Along with a huge barbeque, sink and prep area, there is a teppanyaki grill and marble counter, all tucked away under a custom-built pergola.

Despite the number of plants, trees and outdoor spaces much attention was paid to the garden being low maintenance, with large raised planters laden with year-round colour that require just a bit of weeding.

The owner will miss the space and light but also the location: “After six in the evening, you could hear a pin drop as it is so quiet.” This substantial property with four bedrooms and a gym, is on the market seeking €1.895m through Sherry FitzGerald.