‘This has probably been the best year I’ve had since 1975,’ says one Sutton-based agent 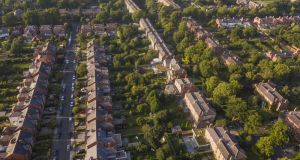 ‘One of the biggest and most surprising features of the Irish property market this year has been the surge in demand for properties in the €1m-plus bracket.’

One of the biggest and most surprising features of the Irish property market this year has been the surge in demand for properties in the €1 million-plus bracket. When Covid-19 descended last March the property sector braced itself for a rocky ride and a near-certain plummet in values in the near term at least. To date this has not materialised, with CSO figures indicating a modest house-price fall in the nine months to September of 1.6 per cent, and a 0.6 per cent fall for apartments.

At the end of the first lockdown eager buyers emerged from unexpected quarters, mopping up sales of prime properties that had fallen through when coronavirus struck. This drove demand through the summer and a high level of activity in this part of the market continues now, with high-end properties still launching in December, and selling agents saying they can’t keep up with demand.

“This has probably been the best year I’ve had since 1975,” says Sutton-based agent Joe Kelly. In the last month alone he has sold four houses in the Howth-Sutton area valued between €1.1 million and €4 million, with none of them even making it on to the open market, he says. The purchasers are a mix of locals and overseas buyers returning to Ireland.

The coronavirus narrative in relation to expats taking stock and realising they just want to be closer to home and have their children educated here is converting to actual sales. Upper-end demand is filled with expats returning from the UK, and to some extent the US – though the latter group tends to focus more on country homes.

While the top five Dublin sales this year range between €3.5 million and €6.2 million, those sales compare somewhat conservatively with recent years, when the range has been closer to between €5 million and €10 million. The new trend is the volume of €1 million-plus sales going through and completing in record time, at or just above the asking price.

Number 14 Wellington Road is one such example. A period original that had been in commercial use, it came on the market through Sherry FitzGerald seeking €3.5 million, and following a short spell of competitive bidding by three or four parties it went sale agreed in November above the asking.

“The upper end has been surprisingly resilient. We currently have four properties around the €3.5 million mark in Dublin 4, Dartry and Dalkey that prior to Covid-19 had been on for quite a while, and they will all close within the next three to four weeks,” says Sherry FitzGerald senior sales director Simon Ensor.

In the last few months Lisney has completed six sales between €2.45 million and €6.2 million in Dalkey, Monkstown, Fitzwilliam Square and Rathgar. Lisney director Robyn Espey says it’s the strongest demand they have seen at the upper end of the market since 2006/2007, with a significant cohort of buyers returning mainly from London and Singapore with cash. “Expats are returning with their families earlier than expected. The stock market is very volatile and we have found that people are seeing property as a low risk, fairly safe bet comparatively,” she says.

DNG chief executive Keith Lowe says his company has in recent months sold more than 50 homes in the million-euro-plus category. “This has certainly surpassed our expectations. Covid-19 has given homeowners opportunity and time to reprioritise their lives instead of assessing the situation on a purely financial basis.”

But the problem now is the supply of homes to meet this upper-end demand, with all agents citing a shortage. Ready-to-go buyers are frustrated by the poor levels of stock available – latest MyHome.ie figures showed general stock levels down 25 per cent compared with this time last year. In such a scenario the only way for prices to go is up, and several market observers this week anticipated a rush on sales and rising prices early next year as sentiment improves on foot of vaccine rollout and pent-up savers look for a home for their cash.

The flow of bank and receiver sales of prime properties – a hangover from the Celtic Tiger era – is beginning to dry up and the few new houses built this year at the upper end are in hot demand. Annesley Gardens in Ranelagh and Monterey in Sandymount both launched in the last fortnight, with homes starting from €1.325 million and €1.65 million respectively, and a number of units in both are already sold. Knight Frank will launch The Collection, seven new townhouses on the former site of the Chester Beatty Library at 20 Shrewsbury Road, in January, and selling agent Ray Palmer-Smith says two sales are already agreed at above €5 million each.

“Despite the difficult coronavirus experience for so many there is a cohort who have been relatively unscathed financially. We’re also seeing a lot of people who have sold all or part of their businesses recently with big cash reserves. They seem keen to move their money to property as there’s little point keeping it on deposit with interest rates so low, and concerns over volatile equity markets,” says Ensor.

Vendor confidence needs to rise to match buyer needs. “What needs to be handled is the lack of confidence in vendors at putting their homes on the market during a pandemic. We need to reassure them that there is strong activity,” says Espey.

The country homes market has also had an unexpected boon this year, with activity stronger than at any time since the early 2000s and properties that would normally take a year to sell going in six to 12 weeks. Two big sales in November were Glengarriff Castle in Co Cork for €2.75 million and An Culu in Co Kerry for €4 million. A number of further substantial estate sales are understood to be close to completion and due to finalise by year end.