Up for sale, a cottage in Dublin 8 and a landmark sliver of a house on the southside 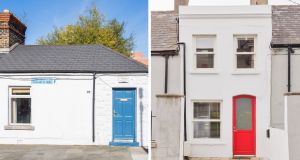 On view this weekend: 90 Eugene Street, in Dublin 8, and 38 Carysfort Avenue, in Blackrock, Co Dublin

Two small but beautifully refurbished homes, one in the city and one in Blackrock, Co Dublin are among scores of homes on open view this weekend as the property market gets moving after the holidays.

In Dublin 8, a renovated corner house at 90 Eugene Street, off Cork Street in Dublin 8 is asking €275,000, while in Blackrock, Co Dublin, a landmark sliver of a house on Carysfort Avenue, has come on the market asking €525,000.

Number 90 Eugene Street carries the street name on its facade, and sits on the corner of Darley’s Terrace. The two-bedroom end of terrace house is one of a cluster of houses for sale on the road, but has the advantage - for some purchasers - of being in walk-in condition.

The 43 sq m cottage has a well thought out interior with most of the space given over to a large livingroom area broken up into distinct living, dining and kitchen spaces. A bedroom and bathroom run across the back, with the bedroom having access to small yard. A smaller bedroom is tucked away with a window to the side of the house. The main bedroom has access to a small yard to the rear.

Sherry FitzGerald is handling the sale of the cottage, which goes on view on Saturday morning.

In Blackrock, number 38 Carysfort Avenue has a tiny frontage, sandwiched between two Victorian villas, but once inside the layout extends to more than 80 sq m and there is a 20m walled garden at the back.

Owners Kate Mulhall and Ben Staves have lived here since 2004 and when they bought the house it was in very poor condition.

“It was in absolute bits,” Mulhall says. “But we were in our 20s and we were in love. and so we just went for it.”

They lived in the house for four years - using a pond liner to cover the leaking extension at the back of the house - but on the day of their engagement, when water started to come in through the pond liner, they made up their mind to renovate.

Architect Tanya Miller of Kelliher Miller Architects drew up plans and the builders moved in for nine months. The house was transformed into a two-bedroom home with a long galley kitchen at its heart, but with additional pantry and utility space and a study area between the ground and first floors.

Upstairs there are two bedrooms, and one of these is now shared by the couple’s two children, Mary and Osca, and this the crux of the decision to move.

“It’s a heartache for us to sell and we’ve thought about it for ages, but the children are growing bigger and they need their own space. We thought about splitting their bedroom in two, but it makes more sense to move.”

It’s for sale with Allen & Jacobs who will hold the first view on Saturday, January 18th.

The house is on Carysfort Avenue, near the junction with the Blackrock bypass, and a stone’s throw from the Frascati Centre and Blackrock village itself.

Number 38 would suit an affluent singleton or a couple, with space to take on a lodger in the second bedroom to avail of the Rent A Room scheme to help pay off the mortgage.

However, it may well be swept up by an investor, who could rent the property to any one of the number of students attending the nearby UCD Michael Smurfit Graduate Business School, or place it on Airbnb as a property full of character.

Bring on the bells at bijou crib on Brabazon Square for €230,000

Here’s my pick of wines to try this weekend: 11 reds, whites, rosés and fizzes
Real news has value SUBSCRIBE