The Cork corner that became a creative powerhouse 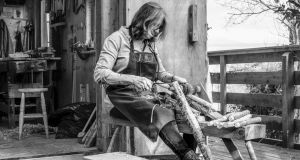 In the course of its history Ireland has had only one outstanding example of a genuine “creative hotspot” – a place so teeming with artists, craftspeople and innovators that it somehow defined the essence of the area, and led to the birth of an entire movement of artistic excellence.

It is, of course, west Cork: a geographical and sociological outlier, whose inhabitants, both locals and blow-ins, have spear-headed the organic movement in Ireland, pioneered an indigenous food culture, revived the practise of farmers markets, and, most significantly, trail-blazed bold new frontiers in contemporary craft design.

This rugged, coastal region is home to literally hundreds of tiny galleries, artists’ studios and craft workshops, with outdoor markets and gift shops also selling the work of local artisans. But how did this one remote and rugged pocket of Ireland attract and foster so many potters, wood carvers, sculptures, ceramicists, painters, embroiders, glass blowers, tinsmiths, weavers, dyers, basket makers, illustrators, leather workers and jewellers? Was there a significant art institution, or government programme, or charismatic individual, or social movement, or trend-setting gallery that can explain it?

The first thing to note is that the west Cork arts and crafts movement was not initiated or fostered by local people, but by outsiders, principally individuals and couples from England, Wales, Germany, the Netherlands, Scandinavia, Dublin and Cork city who chose to head south-west in search of an alternative lifestyle, one that was unencumbered by the technology and throw-away culture of the modern post-war, industrialised era, and more in tune with nature.

The craft renaissance was part of a global counter-culture movement of disillusioned idealists who began to question the status quo in the 1960s. West Cork became a sanctuary for a new way of seeing the world, and crafts were just another manifestation of people choosing to return to more traditional, intuitive practises to express their creativity and create practical items for daily life.

Among the early pioneers were the potter Christa Reichel from Germany, the batik artist Nora Golden from Britain and the weaver Barbara Harte from Sweden. They were soon followed by the likes of ceramicist, Ian Wright, and his artist wife, Lynne, who came from England to live in harmony with nature, growing their own food, raising animals, making cheese and bartering with locals for their other needs. Irish people came too, such as the artists, Brian Lalor from Cork city, and John Verling from Co Waterford, but almost all of these native citizens had lived abroad for some years, where they encountered the counter-cultural ideas.

Mixed with their idealism was a fear of the darker aspects of technology, in particular the threat of nuclear warfare and the gradual poisoning of the environment by new varieties of toxic pesticides and herbicides that were being marketed in the post-War period. There was a belief in Europe that the far south-west coast of Ireland was one of the safest places in the northern hemisphere to withstand a nuclear explosion.

In hindsight it’s tempting to categorise the artists alongside the varied beatniks, dropouts and hippies who also arrived in west Cork at this time in battered vans, VW Beetles and Citroen 2CVs with CND signs emblazoned on the side.

But it was these people’s self-discipline, resilience and understanding of commerce that enabled them to survive the harsh reality of making a living by selling not-vital, craft items in a remote area of real poverty and hardship. The daily trudge through a howling deluge out to the potter’s wheel in a frigid cowshed sorted the hardy souls from the more timid.

The potter, Leda May, took the ferry across from England in an old ambulance in the late 1960s, driving from one pottery to another across Ireland, until someone told her about west Cork and she’s been here ever since, graduating from throwing and decorating domestic pottery-ware to now specialising in hand-painting fine porcelain plates.

The goldsmith, Gert Besner, arrived in Rosslare with a bicycle and a backpack in 1978 and cycled along the south coast of Ireland until he reached west Cork and he too has stayed, establishing homes and workshops in both Skibbereen and Germany. Likewise, the potter and painter, Jane and Robin Forrester, left Rochdale, England in 1973 seeking adventure and somewhere alluring to spend their lives, without too much regulation and government interference. They were joined by another Rochdale couple, the ceramic artist Peter Wolstenholme and his wife Frances.

But why west Cork? Certainly, the beauty of the landscape and the allure of the coastal inlets had a part to play, as did the sheer abundance of abandoned cottages, woodworm-infested farmhouses and cheap land. (Christa Reichel bought her Gurteenakilla farmhouse for £200, which she later sold on to John and Noelle Verling. )

But these elements were to be found all along the western coast of Ireland, which shares more or less the same spectacular landscape. The belief that the south west of the island was safest from nuclear fallout had a bearing on its popularity, but so too did the local Corkonian character. By nature, people in west Cork appear to be less guarded and more outgoing than others – a legacy, perhaps, of dealing with generations of outsiders, ever since Bronze Age traders started turning up here 4,000 years ago to barter for copper ore that was easily extractable along the coast. They were also influenced by having two distinct communities, Catholic and Protestant, living side by side since the 17th century.

But, perhaps the key factor in the success of west Cork’s craft enterprises was the ability of the new settlers to join together in cooperatives and community groups to support each other. Their networks enabled them to ally their combined strength to create opportunities. It’s most evident in the two major organisations that arose during this period: The Cork Craftsman’s Guild and the Society of Cork Potters.

The former was founded in 1973 by 14 craftspeople, many of whom are still working today, such as Patricia Howard who runs the Potter’s Yard in Duncormick, Co Wexford; Mark and Pauline Hoare who still make candles in Kealkil, near Bantry; Jim O’Donnell whose tiny woodworking studio has grown into a state-of-the art furniture factory in Skibbereen; and the ceramicists Pat Connor and Leda May whose work still features prominently in local galleries and craft shops.

The guild opened a shop on Paul Street in Cork city, which they staffed and maintained themselves on a voluntary basis. They arranged a series of craft workshops and side projects to raise the profile of various artists, which led to growing sales, and soon the shop was providing a valuable income to many craftspeople. By 1981 they had a full time manager and a second, high-profile shop in the Powerscourt Townhouse Centre in Dublin.

This was a remarkable achievement for a motley gathering of unallied craftspeople from different countries, different craft disciplines, and with meagre financial resources. The guild insisted on a level of excellence in technique and design before admitting members, and they offered advice to people whose work was not up to par.

The second significant organisation was the Society of Cork Potters, which began in 1980 when the two couples from Rochdale, the Forresters and the Wolstenholmes, invited potters from around Ireland to Bandon for talks, masterclasses, studio visits and an exhibition. So successful did it prove that two years later they held a 10-day International Ceramics Symposium at Carrigaline, offering workshops in such things as raku & low salt firing, working with moulds, and architectural ceramics. The following year they held the World Craft Council – Europe Conference.

This type of mutual cooperation, long-term planning and efficient organisation on the grass-roots level is extraordinarily rare in the arts in Ireland, and the only other place that saw such dynamism and international integration was the Kilkenny Design Workshops which developed in the mid-1960s as a means of advancing the standard of design in Ireland. But, the Kilkenny venture was a government initiative, with full state funding, as opposed to the independent, artist-led initiatives in west Cork.

One would love to think that a similar movement could be replicated today in somewhere like the Irish midlands or border counties which have a plentiful supply of abandoned cottages and derelict farms, and are in desperate need of new vibrancy and fresh perspectives. Yet, creating such complex symbiosis and synergies is hard.

The real question is whether west Cork can survive as a hub of craft innovation in the face of a commodified, globalised world. For the moment things seem reasonably bright, with arguably more artists living in the area than even at the peak of the 1980s, but the older generation are dying off, and with them go their stories and hard-won experience.

West Cork is testament to what can be created when a rural community welcomes in the creatives of other cultures, and supports them as they try implementing a new vision. If you don’t believe me just head out along the back bothreens anywhere from Allihies to Inchigeelagh, or Bandon to Bantry, and see what you find.