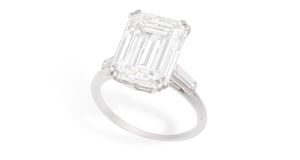 Adam’s Fine Jewellery and Watches sale on September 15th has a couple of pieces that will send you right back to scenes reminiscent of old James Bond films.

Top of the bill is lot 103, a single-stone ring with a whopping 7.75ct diamond and a rarity in jewellery shops, not to mind the auction circuit. Its estimate of €120,000-€180,000 will be beyond most budgets, but it is really a piece that you would eschew all other jewellery for.

A real Bond story is that of lot 161, an exquisite diamond cuff bracelet by Fred Paris, from 2010. A designer from the jewellery house arrived to meet the present owner in Monte Carlo a decade ago, where together they designed the one-off piece. With almost 32ct of diamonds in total, including a central pear-shaped sparkler – itself weighing over 5ct – it really is one of a kind (€60,000-€80,000).

Also in there, if you are getting your Eartha Kitt-inspired Christmas wish list started, is an impressive pair of diamond pendant ear clips. With 20ct in clusters of marquise-shaped diamonds, and a further 8ct in two pear-shaped drops – that can be detached for more modest day wear – they are quite a stunning set, matched with an equally stunning tag of €45,000-€55,000.

A more affordable but equally beautiful gift for the Christmas list is lot 31, a pair of sapphire and diamond pendant earrings from the 1920s, with 6.50ct of diamonds and three large un-treated sapphires, the largest of which is 6.50ct (€8,000-€12,000).

In the watch collection that include pieces by Cartier, Chopard and Van Cleef and Arpels, lot 196 is a Pearlmaster 18k gold, diamond and sapphire-set bracelet watch by Rolex, which the catalogue describes as “the mostly creatively flamboyant . . . the Pearlmaster family also represents some of the most expensive pieces in the entire Rolex portfolio” (€30,000-€40,000).

There is also something of a serpentine theme running through the 250 lots. Today some associate snakes with duplicity and deceit but prior to Christianity in Ireland, the Celts associated snakes with rebirth and healing. Lot 20 is a rare turquoise, diamond and garnet serpent necklace from 1865 (€3,000-€4,000).

Modern serpentine pieces include a really lovely contemporary style sapphire and diamond double snake ring (lot 98, €700-€900) and two Bulgari watches. The first, lot 132, is a rather elaborate Serpent Tubogas in stainless steel and black ceramic with diamonds (€5,000-€7,000). Lot 134, a more subtle affair of the same name but without the ceramic, is listed with the same estimate.

A really lovely piece is lot 152, a cultured Tahitian pearl ring (of grey tint) by Julie Genet. The ring “Le Roi Grenouille” is inspired by the scene from the Grimm Brothers fairy tale The Frog Prince, where the little frog holds the princess’s orb. With diamond-set claws modelled as stylised frogs’ legs, it’s a really super piece priced at €1,200-€1,800.

To showcase some of the gems on offer Adam’s has produced a video, which is on their website, where interior designer Suzie McAdam tries on her favourite pieces from the collection. As photographs of jewellery are notoriously difficult to portray actual size and impact, the video gives a really good indication to some of the featured treasures. See adams.ie