Hope and history rhyme with five-star luxury at upcoming auction 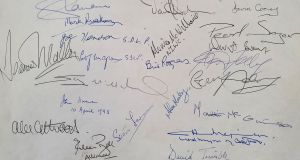 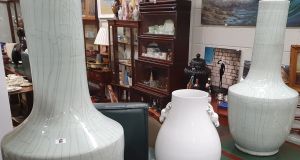 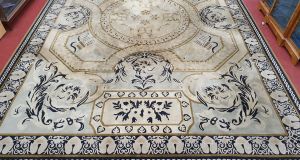 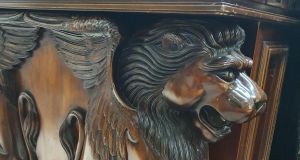 Details on the desk from a five-star London hotel include gargoyles and Greek key frieze €600 - €1,000 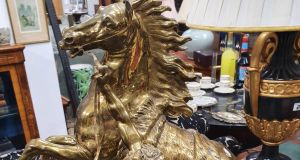 History and luxury combine at a Sean Eacrett sale in Ballybrittas, Co Laois on September 19th, where more than 1,000 lots will be auctioned. Featured items come from the estate of Maeve and Ed McAleer in addition to private clients and a landmark five-star London hotel.

The top lot in the Political History section is a copy of the Belfast Agreement, also known as the Good Friday agreement. According to the description on the website, it is an official copy of the final agreement with cover memorandum dated Good Friday, April 10th, 1998, with the signatures of George Mitchell, Harri Holkeri, Paul Murphy and John de Chastelain.

However, there has been a significant rise in interest in these signed copies. Last April an official copy of the final draft, printed at Stormont with autographed signatures of 44 participants,achieved €28,000 against a reserve of €5,000-€7,000 through Whyte’s, so this is certainly one lot to watch (lot 568 €15,000-€20,000).

The second part of the sale includes the interiors of a five-star hotel foyer in Mayfair, London. Though the hotel requests not to be named, visitors may well recognise some of the pieces from the landmark hotel that just may share its name with an Irish cinema and a type of cabbage. Seventy items including giant oriental urns, oversized rugs, wool carpets, lamps and mahogany desks are on offer.

In art deco style, the five urns, which are almost 2 metres in height and hand-painted in oriental style, have a reserve of €500-€800 each. There is also a selection of smaller urns in plainer format that measure about a metre in height at various estimates.

A further outsized piece is a mahogany desk with a double kneehole front, Greek key frieze and carved gargoyles measuring over 3 metres, which is seeking €600-€1,000. There are also three smaller desks of various sizes with prices from €300, and a mahogany-veneered square foyer table with ormolu mounts listed at €100-€200. Four Gainsborough-style armchairs feature (€200-€400 each) along with ceramic bulbous lamps (€80-€120 a pair) and three wool rugs. Also in there is a pair of brass “Marley” horses in art deco style standing at half a metre tall (€250-€350 each).

While the sale has 70 pieces from the hotel, the site also lists a remarkable number of rugs in varying styles, but mostly oriental. There are more than 50 on offer, with some estimates as low as €50-€80, all the way up to €600-€1,000 for the hotel rug.

If you are in search of a mirror, the sale has 17 listed. These start at between €20 and €40 for humbler offerings, and go all the way up to €200-€400 for what the catalogue lists as a “really good 19th-century ebonised gilt oval wall mirror (with some faults)” and “a really good William IV mahogany crutch mirror”.

Eileen Flynn: ‘As a Traveller woman, I was undermined in the maternity hospital’
8