'You can produce so much from so little, once you have the know-how' 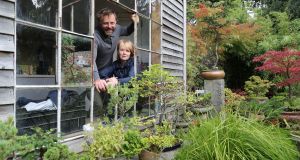 When this spring’s lockdown brought the world to an abrupt stop, it offered many the unexpected opportunity to forge new, life-enriching relationships with their gardens. But for garden designers and nursery owners Oliver and Liat Schurmann, “the great pause” found them busier than ever as they juggled the huge surge in online orders with the seasonal demands of running their specialist plant nursery in the foothills of the Dublin mountains.

Located in the historic walled garden of Tibradden House, Mount Venus Nursery has long been considered a smorgasbord of horticultural delights, a place for discerning gardeners, designers and landscape architects to seek out the choice perennials, ornamental grasses and unusual shrubby species perfectly suited to Irish growing conditions yet somehow rarely seen for sale in conventional Irish garden centres.

But this spring was different. “We had so, so many new customers contacting us online including lots of young gardeners using that free time as an opportunity to start problem-solving by reading up on the kinds of plants that would suit the growing conditions in their gardens. Once bitten by the gardening bug, they stopped worrying about low-maintenance planting and started really enjoying the process. It was amazing to see,” says Oliver.

For the Schurmanns and their tight-knit staff, those early weeks of full lockdown were a frenzy of activity. “It was a lot of extra work in terms of preparing, packing and delivering orders but we were just happy and relieved to be so busy,” says Liat. “It meant we could keep our people employed and keep the business going.”

The engine of this small, family-owned business is its large, homemade propagating bench

As the chief architect behind the nursery’s website, it was also rewarding to note how many new customers were using it as a resource for gardening advice and know-how.

“Liat had put a lot of work into revamping our website over the last couple of years so that it isn’t just an online sales tool but a place where gardeners can access lots of useful, practical information. That really helped when it came to attracting customers online,” explains Oliver.

That crazy rush of online orders has gradually eased with the subsequent relaxation of restrictions but Mount Venus Nursery’s never-ending race to produce enough new stock to keep up with demand continues. Almost all of the propagation takes place in the large, sloping nursery field just across the road from the walled garden where the Schurmanns grow their plants from seed, cuttings or divisions sourced from the nursery’s mother stock, a process that starts afresh each year in spring and continues throughout the summer and autumn months.

“Unlike many Irish garden centres, we weren’t hit by the disruption to supply chains caused by the lockdown because we grow our own plants rather than buying them in. I think that’s been a valuable lesson for many.”

The engine of this small, family-owned business is its large, homemade propagating bench, a waist-high, 8-metre long wooden structure housed within one of the nursery’s two polytunnels and filled with dozens of trays containing thousands of baby cuttings. Bottom heat – the magic ingredient when it comes to successful propagation – is provided by a mix of heated mats and cables while watering is carried out via a simple irrigation system suspended just above it.

The bench’s series of hinged lids are covered with sturdy plant fleece to protect the baby plants from extremes of temperature and to lock in humidity, further bolstering the rates of successful propagation.

Once they show obvious signs of having successfully rooted, each tray of cuttings – a constantly revolving cast of many thousands – is swiftly moved out of the heated bench and on to the floor of the polytunnel to “harden” them up by accustoming them to cooler, less controlled conditions. They’re then potted on and moved outdoors as soon as possible to acclimatise them to normal growing conditions.

The types of plants propagated in the nursery vary according to the particular season.

“At this time of year we’re sowing lots of different types of umbelliferous plants,” says Oliver.  “Things like astrantia, angelica, giant fennel [Ferula communis] and Selinum wallichianum, the seed of which has to be sown very fresh for good germination rates. We’re also taking cuttings of many different species; not just stem cuttings but also root cuttings, which really suits certain species such as Japanese anemones, eryngium and oriental poppies.”

Oliver credits his and Liat’s encyclopaedic knowledge of plant propagation to their three-year horticultural apprenticeship as young gardeners under the expert eye of the Bavarian nursery owner, Dr Hans Simon. “We learned so much from him.”

For the Schurmanns, one of the great benefits of this spring’s lockdown – along with connecting with a whole new generation of gardeners – was the opportunity it gave them to reconnect with their large inventory of plants.

“We’ve grown so many different kinds over the years that inevitably some species or varieties get half-forgotten or pushed to one side. But with Bloom [the annual event in Phoenix Park] and almost all of this year’s plant fairs cancelled and our garden design projects on hold, we were able to give the nursery all our attention. It’s a long time since we’ve felt so on top of things in that regard. In the process, we found motherstock of certain plants that we thought were lost long ago or that we’d simply not had time to propagate until now.”

Examples include the lovely purple bell vine, Rhodochiton atrasanguineus, a tender perennial climber that produces its dense clusters of claret-coloured, bell-shaped flowers throughout the summer. Another is the pretty woodlander known as Meehania urticifolia ‘Japanblau’, a hardy ground-cover perennial with blue, scented, pollinator-friendly flowers that appears from spring to early autumn.

“I didn’t know we still had it until I stumbled across one solitary plant. I took 10 cuttings from it this spring and then, from each of those 10 cuttings, I took another 10 cuttings. Now we have a hundred plants,” says Oliver, for whom the magic of plant propagation has never grown stale.

“That’s one of the truly wonderful things about running a plant nursery. You can produce so much from so little, so long as you have the necessary know-how. I don’t think I’ll ever stop getting a thrill from that.”

Of the many precious lessons that this global pandemic has taught gardeners, one of them is the value of self-reliance when it comes to plant propagation. That includes the art of home seed-saving. This is the perfect time of the year to get started by collecting the ripe seed of many different ornamental and productive plant species. Examples include cosmos, dahlia, astrantia, lunaria, tomato, tagetes, calendula, sunflower, sweet pea, chilli peppers, sorbus, crataegusand viburnum. For a detailed guide to home seed-saving, visit seedsite.co.uk

Jimi Blake, author, owner and creator of Huntingbrook Gardens near Blessington in west Wicklow, has created an online module-based version of his popular Plantsperson Course with content that includes video, extensive plant notes and practical demonstrations. Each module costs €120, to sign up for individual modules or the entire online course, see huntingbrook.com

What sold for about €355k in Chapelizod, D9, Blessington and Stoneybatter
9