From dry rot to ultra high net worth lunch guests, the struggle to make a historic house pay 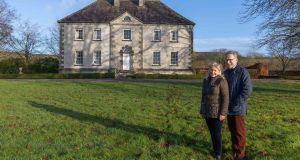 The Irish country house is a space where “order and beauty meet”, or so WB Yeats is said to have said. But if you happen to own one, you might find life a little more chaotic. Perhaps that’s the nature of the beast: those remarkable façades standing for stability, telling of centuries of minding the land; while inside owners are all too aware of dry rot, harsh drafts, rattling roof tiles and damp patches. Persevere though and you can still achieve your own little corner of tranquility and, as Geralyn and Kieran White of Ballysallagh in Co Kilkenny demonstrate, you don’t have to be landed or titled, to claim title to a very nice patch of land.

Ballysallagh has just won the inaugural O’Flynn Group Heritage Prize. Devised by architectural historian, Robert O’Byrne, the annual prize of €5,000 acknowledges the owner’s commitment to the preservation of buildings. It’s a timely boost, as while such houses may inspire envy, keeping them going nowadays is a headache raised to migraine-levels by Covid-19. Think about all that income evaporating overnight from weddings and sleepovers, garden visits and house tours, and the festivals that take over the likes of Stradbally (Electric Picnic) and Ballinlough (Body & Soul).

The O’Flynn award is open to members of Historic Houses of Ireland (HHI). Set up in 2008 to support owners of these properties, there are currently 140 “member houses”. HHI have also recently collaborated with Creative Ireland on a report exploring how these houses can be more widely used: as exhibition and concert venues, film locations, forest schools, centres for biodiversity and more. As O’Byrne puts it, “nobody hugs these houses to themselves. These days the owners are thrilled if it’s giving them income.”

I recall the late Desmond Guinness, who co-founded the Irish Georgian Society, telling me about wearing coats to bed, and murky tepid water when his turn for a bath came at the end of a succession of family members. When Kilkenny pharmacists, the Whites bought Ballysallagh in 1987, it would have answered to a similar description.

“We bought it from a love of the architecture, and what we could do with it,” recalls Geralyn. “It was in the height of the first recession, the windows were all falling out, there was no heating, no sense of comfort. But, Georgian houses come up rarely enough in Kilkenny, maybe once in a generation, the weather was glorious, and we looked at it through rose coloured glasses…”

Full of energy and optimism, the Whites applied for a Government “bathroom and window grant”, and with 35 windows to restore, they were cautiously optimistic. “But the Government fell overnight, and the grants were removed. We were devastated,” says Kieran.

“Then I contacted the Irish Georgian Society,” says Geralyn, taking up the story... “Nothing daunts her,” says Kieran... “And they said they had no grants, but could we have some people to dinner?”

For those not in the know, tours of Ireland for wealthy (usually) Americans are big business, and it’s a business that Fáilte Ireland is planning to grow, announcing last month that they are exploring the ultra-high net worth luxury travel side of things.

If you’re wondering if you might fill the bill, “ultra-high net worth” means you have liquid assets of at least $5million. If Covid-19 is going to hit mass tourism for the foreseeable future, it makes sense, but these are visitors that don’t tend to hop on a bus, or even stay in hotels, unless you’re talking the Merrion, Ashford Castle, Adare Manor or Ballyfin end of the scale. Instead, they like to rent castles and go to authentic spots for lunch and dinner. Looked at this way, houses like Ballysallagh are good for the country and the economy.

The Whites’ first dinner was for The Dallas Garden Club (which sounds like a euphemism, but isn’t), and Geralyn received IR£40 a head (apparently people with footmen could request more), borrowing glassware from nearby Jerpoint to set the scene.

“We’d do it once or twice a year, and it set us up,” she says, wonderingly. A Heritage Council grant also helped with the roof but, apart from that, the 30 year project to restore Ballysallagh was funded by passion, ingenuity and sheer grit.

“When the first groups came, it was raw,” says Geralyn. “I practiced the menus on the children, but the Americans loved it. They realised we were a young couple, making it work. As the years went on, we’ve fine tuned it.” With just four bedrooms, Ballysallagh never got into the country house hotel business, but each of those rooms, plus the drawing and dining room on the main floor, and kitchen and study at garden level have been restored with a loving and fastidious eye.

“We got heavily into period detail,” agrees Kieran. “But it’s finished,” he pauses. “To a point.” “It IS finished,” declares Geralyn determinedly. “We built up a collection of friends and acquaintances who are knowledgeable about these things,” says Kieran. “Craftspeople who can do lime plastering, stone masons, an upholsterer, a carpenter.” The couple agree that these skills are becoming harder to find as fewer younger people want to take on the time commitment of an apprenticeship.

Slaves to symmetry, the Georgians couldn’t abide a house that didn’t balance, and things had to also look perfect from the outside. Ballysallagh is built on what is known as the “tripartite plan”, which, Kieran explains, means that if you want a grand entrance hall, you’re going to have to suck up a massive gallery above. This solves a mystery I had always pondered: how come large houses of that era seem to waste so much potential bedroom space with vast landings. I had initially (getting my dates utterly muddled) put it down to stiff crinolines.

Geralyn talks passionately about the childhood their now-grown children had in the countryside, exploring with ponies. Kieran is equally passionate about finials and screwfixings. Does he find it hard to relax when things are out of context, I wonder? “Yes,” says Geralyn immediately, describing his reaction to contemporary light switches popping up in Period dramas, while Kieran contributes a childhood memory of spotting a lorry in the background of a Robin Hood film.

Before Lockdown, the Whites spent a lot of time in the kitchen. “It’s big and airy, we like cooking, and the Aga gives heat. The study on the same floor is also a very snug room.”

In the kitchen, the table and chairs were made by Kieran Costello of Freshford, from 14ft lengths of Irish elm, which themselves had come from the Brabazon family at Kilruddery Estate. The cupboards and window shutters were salvaged from Long Orchard House in Tipperary, and this, says Geralyn, “was long before we had access to Google and eBay to source things”.

Covid shifted the couple’s way of living however. “We used the drawing room a lot during the lockdown. We’d go up and sit and look at the cattle crossing inthe evenings. It’s something we never had time for before. We had used it of course for entertaining, but through lockdown we have a whole new affection for it. It became a new friend to us.” Like so many of us, Covid also led the Whites to a decluttering project, and it is a relief to hear that even big houses can have too much stuff.

“A house is a pathway to understanding the past. Not just the people who lived in it, but the artefacts and the crafts, and the people who made them,” says Geralyn. She tells of coming across a pair of 18th century portraits, unframed at Adams Auctioneers, and realising that they were of Dr John Doyle and his wife, Frances Savage, former owners of the house. “They weren’t the ‘Right Honourable’ anyone, but I knew them from the history of this house.” Now the Doyles are framed and back home, gracing the walls of Ballysallagh once more.

If Ballysallagh really is finished, do the Whites have new plans for the future? Geralyn talks about occasionally loving the idea of “a glass contemporary house, you know, the kind with underfloor heating and one sofa.” “You’d be bored,” says Kieran. “We’ve put so much into this house,” says Geralyn, “There’s so much of us in it. I couldn’t see us parting with it.”

With a number of bodies, but little cohesion, it’s hard to know where to start when tackling an historic house project. From the Irish Georgian Society to the Heritage Council, the Irish Historic Trust, the Landmark Trust and Historic Houses of Ireland, there’s still surprisingly little support. Now open for applications for 2021, the Historic Structures Fund could be a good bet. Run by the Department of Housing, Local Government and Heritage, it awards grants of between €15,000 and €50,000, and €50,000 to €200,000 – depending on the size of the property – and it doesn’t just cover places with parapets, turrets and ha-has. There’s also a strand for vernacular heritage. Find out more from your own Local Authority, but hurry, the closing date is January 29th.