Christmas gifts at auction: The perfect trifle bowl, a gramaphone and Yeats prints 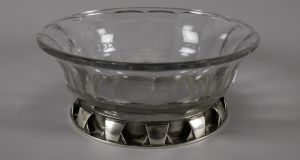 Whyte’s Christmas timed online auction – currently open for bidding and ending on December 16th – offers those in search festive gifts an array of unusual and interesting pieces to suit all budgets.

From artworks and silver to sculpture and wine, there are a great number of paintings and prints by well-known Irish names such as Louis le Brocquy, Patrick Scott, and Robert Ballagh along with international names such as Damien Hirst.

For the season that’s in it, the sale lists a selection of Christmas greeting cards by Patrick Scott. The five colour prints, which are limited editions and signed by the artist, have estimates of €150-€250 each, and would be lovely framed as part of a festive collection.

Le Brocquy’s own work is represented in five lithographs/aquatints all signed by the artist ranging from €800-€1,500.

Two signed etchings by Damien Hirst, reported to be the UK’s richest living artist worth an estimated £215million, are priced at €1,500-€2,000.

For music lovers the sale features artworks by Bob Dylan and David Bowie. Bowie’s untitled self-portrait limited-edition signed photolithograph is seeking €2,000-€3,000, while Dylan’s Cassandra print, which is also signed is listed at €1,200-€1,800.

Dylan, who was the first songwriter to be awarded a Nobel Prize in literature in 2016, made headlines this week when – in one of the most lucrative music publishing deals ever struck – he sold his entire catalogue of 600 songs including Blowin’ in the Wind and Knockin’ on Heaven’s Door to Universal Music for an estimated $300 million, (€247 million) according to the New York Times.

A strong offering of traditional landscape paintings by James Humbert Craig, George Gillespie, Maurice Wilks, Charles McAuley, and Rowland Hill, as well as Alan Kenny and Henry McGrane feature, with prices from €400 to €2,000.

A collection of four photogravures by Sir William Orpen (€200-€300 each) could make a lovely gift for those who cannot stretch to an original. Drawings by John Butler Yeats guide from €300, while prints by Jack B Yeats start at €600.

More unusual offerings could be an early 20th-century gramophone (€150-€200) – an art object itself with its attractive large horn – or a mid 19th-century music box playing Irish and Scottish airs (€200-€300). For the aspiring MasterChef there is a 19th-century Mandoline All Vegetable Slicer by the Arcadia Manufacturing Company, New York (€100-€150).

For presents of mind, The Book of Kells, the first and only complete facsimile, published in 1990 with the authority of Trinity College, Dublin – one of 1,480 – is listed at €6,000 to €8,000, and has beautiful binding and its presentation case.

If trifle is your preferred yuletide dessert, the heavy crystal bowl by Baccarat on a silver base would make a very practical gift (€200-€300) alongside some of the wonderful silver spoons by Ó Mathúna.